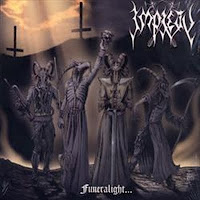 Those beholden to only the most recent of Impiety's full-length efforts like Terroreign or Formidonis Nex Cultus would be misled to think the Singapore titans' methodical, nuclear blasting warfare has been the sole channel to their longevity in the underground. While there have been hints of such extremity since their earliest work, the band would often venture into a more straightforward black metal enterprise, which in my opinion produced some of their more intriguing work. Funeralight was originally a very limited run release via cassette, following the band's debut album Asateerul Awaleen, and it treads a violent black path saturated in the carnal, thundering chaos that has long placed the band in the forward ranks of the most vile, uncompromising metal imaginable.

Funeralight is interesting largely because of the atmosphere created in its 20 minute existence. Blasting, searing black metal rhythms that balance stark violence and melodies under a near constant onslaught of gongs and loud synthesizer strikes that seem to spur forward the soldiers of this hellish battlefield, while the drum kit storms and the guitars emit a great number of blasphemous insults. Armed with titles like "Sodomythical Frostgoats", "Sorcerique Baphostorms" and "Dragon Oath Diabolus", the four tracks flow together in a serpentine mass of confusion...for without the actual cessation of the music between them, it would be hard to determine which direction lies north or south. It's a beautiful, consistent mess, and though some might consider the constant ringing of the percussion a crutch, it adds an air of distinction to this release among the many others of their back catalog. Probably the most controlled track, the closer "Dragon Oath Disciple" is my particular favorite, for the powerful mid-paced glories that seethe in the rumbling of the ominous synthesized choirs and percussion.

Despite the exotic flavors and the geography of its creators, Funeralight fits in rather well with much of the evolving black metal of its day. If you could combine Emperor's In the Nightside Eclipse with Celtic Frost's To Mega Therion, and then dowse them with the vocals of early Kreator, you'd be pretty close to what Impiety has produced on this EP. It's brief, energetic, diabolic, and often a little sloppy sounding due to the imbalance of the core instruments with the added synth and percussion. It's also not the best of Impiety's work. But the atmosphere created within is just rare enough that you'd wish to spin it from time to time (assuming you've got the 2006 Agonia records re-issue), and it holds up remarkably well for something so primal and filthy.