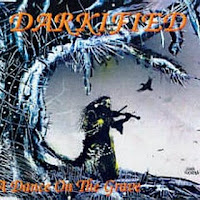 You've probably noticed that I'm not the biggest fan of compilations in my reviews, but this really only extends to the corporate, cash cow variety of compilations where the material is simply culled from an artist's readily available works. When it comes to a decent fan package, as in a collection of demos or rarities that are otherwise nigh impossible to track down, I certainly take exception. And in the case of a great many obscure 80s and 90s black, death, and thrash metal acts, bands and labels have been very wise to release their entire works in an easily managed package. It's a process that works well to help inject a lot of highly unknown artists into a metal populace that is far more accustomed to consuming the latest round of releases from the current bands, and highly viable for CD collectors.

Darkified is one old Swedish band that was given this makeover with the release of A Dance on the Grave, which collects their 1991 Dark demo and 1992 Sleep Forever EP in one place. Assuming you were not around back then to tape trade or acquire this material from a distro, a festival or from the band themselves, it's very likely that A Dance on the Grave will be your inception into the band's primitive mix of classical/folk intros and interludes and rugged, primal death metal. Though some of its members did not go on to illustrious careers, Darkified is notable as one of the earliest works of Robert Karlsson (vocals for Edge of Sanity's Cryptic, vocals for Scar Symmetry, and has also worked with about a dozen other bands), and Jocke Göthberg (Dimension Zero, Marduk) and others. It's amusing that the two of them would go on to be vocalists for some of those bands, because here with Darkified they were the rhythm section, on bass and drums respectively. The vocals and guitars here are performed by Martin Gustavsson and Martin Ahx, with none other than Dan Swanö contributing some keys and leads to the Dark demo material, and an additional acoustic guitar player (Jonas Amundin).

With all of this history, it's probably a foregone conclusion that the material of Darkified is pretty killer old school Swedish death in the vein of Authorize, God Macabre, Gorement, Sorcery and the like, and while the sound of this band does compare to those, and they've got an atmosphere in both the composition and production that will most appeal to fans tracking down such obscurities, I didn't find the material all that engaging or memorable. It's crude, grating and barbaric like most of the band's underground peers of the time, both in Sweden and beyond. I hear a brief parallel to 'raw meat' death metal bands like old Cancer, Impaler, and perhaps Revenant, but with the added occasional keyboard to give the material the crunch of a gothic, morose weight.

The Dark demo consists of just over 10 minutes of material, 3 metal tracks sandwiched by an intro and outro. The intro seems ripe for some marginal 80s horror film, while the outro "Out from the Darkness" is a little more 'pleasant', if you could consider a demonic incantation over a stream of synth flutes and clean guitars pleasant. As for the metal tracks, "Howlings from the Darkness" begins with a creepy gothic ambiance, somber melodies initiating the buzzing grind of death, with Martin 'stretching out' his voice in a few throwaway growls before the band lapses into a slower, death surge with a keyboard. "A Summon for the Nameless Horrors" opens in a storm of primal death, without evoking a very catchy riff, and a keyboard is also added later for some atmosphere. There's also a nice, if generic, groove breakdown. "The Forgotten City" is perhaps the best song from the demo, with some solid, decrepit chord work that reminds of very old school Entombed, and an eerie use of a rasp under the guttural grunts. Invoking Cthulhu is also a winning gesture, and in fact much of the band's material is Lovecraftian by nature.

The Sleep Forever EP contains three tracks, one of which is a re-recording of "The Forgotten City" that exceeds the quality of the original, due to its denser production, and the finer tint of the synthesizer. "Sleep Forever" is likewise pretty cool, a gloomy death spiced in doom and light keyboards, with a gut-busting outbreak where the vocals rise to a level of sickening violence. The outro to Sleep Forever is a brief instrumental called "The Whisperer in the Darkness" which is all clean guitar strumming, drums and synth, once more with the horrific overtones.

As a piece of history in the Scandinavian death scene, this compilation is probably worthwhile to collectors who don't already have the constituent releases. To everyone else, it's simply not very good unless you're constantly craving morbid old school Swedish death and don't mind the fact that the band were not very good at writing riffs. For Darkified succeeds only where the creepy atmosphere comes together in a marriage of hellish vocals, brute guitars and offsetting eerie keyboards, and not on the strength of any one element. There were many far superior acts at the time performing in the same style (hint hint Left Hand Path nudge nudge The Winterlong), and thus A Dance on the Grave functions only as a curiosity and not a hallmark of the genre.

http://www.myspace.com/Darkified (not official, but you can hear most of the metal tracks from this release)
Posted by autothrall at 8:32 AM