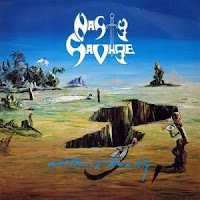 With Nasty Savage's sophomore album Indulgence, the band had made a positive shift in direction towards the technical, schizophrenic thrash metal that was dominating both sides of the Atlantic by the late 80s. And if anything, the followup EP Abstract Reality was ample proof that the band had no intentions of turning back to their corny, showy metal roots any time soon. With four of the most proficient and no nonsense tracks of the band's career, and a new bassist in step (this is the only recording Chris Moorhouse would appear on with the band) they asserted themselves firmly into the tight wedge that comprised the more sophisticated end of the metal spectrum, without losing the sporadic insanity of Nasty Ronnie's Jr. Jeckyll & Mr. Hyde/steamroller meets siren vocal presence.

As far as the shortplay release goes, Abstract Reality isn't all that cheap with your purse. You get four new tracks that last almost 20 minutes, an interesting continuity through the use of the same abstract cover artist as Indulgence. But chances are if you own either that CD or the original CD release of the debut, you've got this tacked on there, and you'll notice the obvious 'drift' between the bands roots and their late 80s direction. It works best as a bridge between Indulgence and Penetration Point, of course, since that's the geography of its origin, and the very tight performances are like a sharpening of the proverbial vorpal sword, to prepare the fan for the steadily hacking force of the 3rd album. Savage continue their predisposition towards pseudo-intellectual themes with song titles like "Abstract Reality" and "Eromantic Vertigo", but they've got the musical complexity to back it up.

First is the title track, which barrels along like a meatier, but less bloodied chunk of Rigor Mortis type murder-thrash. The riffs are solid though average, and the prize here goes to Nasty Ronnie, who is giving one of his most controlled, but powerful performances. The bridge and solo are likewise quite good, with a structured schizoid thrash rhythm that dares to peer into the padded cell of the band's psychotic imagery. "Unchained Angel" is a slightly dirtier groove that heralds a female apocalypse, with strangely seductive lyrics considering their cataclysmic ramifications. Once again, it's the vocals and solo break that carry the song. The riffing provides enough thrust to get the pit swirling and heads banging, but they're not highly memorable. "Eromantic Vertigo" has some of the better guitars here, with circular, madness-inducing patterns that flow in a rather clinical response to the vocals that rush right down the middle like a crafty receiver being flanked by walls of epileptic linemen. "You Snooze, You Lose" seems like a rather tired cliche for a song title here, but the music itself is monstrous, and I'd have to say it is the most impressive due to the violent orgasmic riffing. The chorus is obvious, and ignorable as the music moves with such barbaric certainty.

On the strength of Indulgence and Abstract Reality, it is rather perplexing how Nasty Savage would not rise to the ranks of the better known thrash alumni. But to be honest, the more technical, progressive leanings of the genre went widely ignored by all but the closest of listeners, thus you had brilliant, first rate albums like Coroner's No More Color, Artillery's By Inheritance and Deathrow's Deception Ignored, each with stronger, more complex and interesting riffing than a dozen of today's stacked hyper tech death metal bands, known to but a few. And those were European bands, hailing from countries of arguably far better taste than our own. Snug in their Florida dwellings, where death metal was swiftly becoming the next big thing, Nasty Ronnie and company must have seemed sadly doomed, though they were one of the few interesting thrash bands ever to hail from the South.