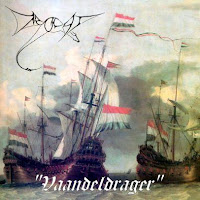 Krocht are a Dutch band performing the sort of historically themed black metal I most like to hear: thinking not entirely outside of the box, but expanding the genre at its parameters due to an increased if subtle use of pianos/synthesizer and a tinge of romantic notion within the bleeding streams of axework. Of the band's three demos, I favor this second offering, Vaandeldrager, above Actum or Erfgoed; there is simply a transcendent nature to the compositions here that grabbed my attention and began suckling at the teat of inspiration.

This is an enjoyable demo through all its 20 minutes of sorrow and majesty, opening with the plucky synthesized string instrumental "De Zeilen Gehezen". I'll admit, I half expected Enya's vocals to appear over this, it reminds me of something from her first two albums, but instead you get only the the instruments and a steady sample of waves. "Koningin Van Het Noorden" is a level eruption of arterial spray across the stern of this sailing vessel, with inaudible bass levels but enough violence and melody within the guitars to compensate, and a curious use of piano flurries that harbor just beneath the riffs. There's a nice, trippy break before 2:00, and the riffing grows slower, with a dire, dominant expression of life-sapping melody. It's quite easy to close ones' eyes and immediately conjure old black & white silent films of naval battles, with the action sped up to match the metabolism of the mind.

The remainder of the tracks actually have a tendency towards the raw, with "Kazemat" evoking beautiful and mystic guitar rhythms over a subtle scintillating keyboard, Gheest's vocals growing ever more desperate and torturous. There's a cool break here where the synth escalates into a kick ass, charging riff, and then a nice flourish of synthesized woodwinds before one of the more discordant and manic rhythms arrives over around 2:20. An excellent song. "Moed Der Wanhoop" is another synth-laden ode to forgotten glories, its highly melodic riffing endowed with the scenery of historical tribulation. The title track, "Vaandelgrager" closes the demo at a slower, ale swilling gait, the guitars a force of will above the maelstrom of maritime slaughter brought by the cheesy if entrancing keyboards that rear themselves like wound-up cavalry.

This is probably one of the more promising demos I've heard from the Dutch black scene, and Krocht is a band I'd very much like to release a full-length, which expands upon the French Revolutionary theme and historical gloss that so few artists in the genre bring to the table, so foiled are they in the typical Satanic/occult themes. Supposedly, they've already got one recorded and ready to fire. Though Vaandelgrager is the best of the band's three demos, the others are also worth hunting down, and really, the band is well worth snatching up to any label with a sharpened fingernail on the pulse.