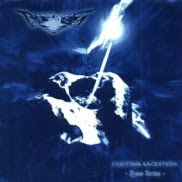 France has put out a slew of very good black metal bands, but they aren't terribly well known for their death metal aside from a few groups like Yyrkoon, Arkhon Infaustus and Gojira. Whispering Tears' debut caught me by surprise, incorporating a lot of that patented French experimentation, so beloved by their black metal countrymates. The album is incredibly varied, working in strings, synth, whispered vocals, spoken word, and a touch or two of female clean singing, just to name a few. It's definitely not your usual grinding, punishing death metal.
Musically, there's a lot to like. Often on the album I found myself thinking of Nachthymnen-era Abigor, with more death metal grunts and generally a heavier tone. "Carmen Lacrimae" opens with a cello and some kind of woodwind laying down a lonesome melody, along with some strange French spoken vocals, male and female - this intro could easily be something off a Sleepytime Gorilla Museum album. "Whispering Tears" takes hold with a furious death assault, death metal grunts and blackened vocals sharing the stage. I quite enjoy the guitar work, especially the creepy lead around 1:20. Some girly vocals rear their head again, but they aren't too intrusive, as they are pretty buried in the mix.
"E(vil)charistia" continues the album's sinister tone, a somewhat gothic, operatic feel. This song goes all over the map, and despite shifting from slow, to fast, from whispered vocals to clean to very potent death metal vocals, it remains very cohesive somehow. The band possesses oodles of musical talent, that much is obvious. "Complainte Des Ames Écorchées" begins with some Castlevania type organ, proceeding to something complex and beautiful, yet dark. A section toward the middle of the song is simply stunning, unlike anything I've heard (that I can remember, anyway). The band's drummer shows some real talent on this song as well.
A myriad of instruments are featured on Carmina Lacrimosa, forming a complex fabric of lush, spooky soundscapes. "Until Death Do Us Unite" has a major King Diamond feel, although it's still its own nightmarish beast. The final track is some kind of Mozart tribute, apparently, and I could've done without it. Unfortunately, there are no lyrics available on the internet that I've seen, so it's hard to judge the album as a whole - but what I can pick up on is good, if not perhaps a bit cliche. Musically, though, the album is definitely worth a listen if you're into atmospheric/symphonic metal. Chalk up another strange/awesome band to France.
Verdict: Win [8/10]
http://www.myspace.com/wtears
Posted by JD at 8:28 PM

I don't think I've ever heard this before. And I aim to fix that!

Thanks! Let me know what you think.

About the album, that is.