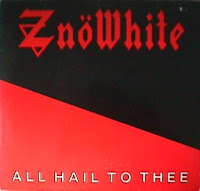 All Hail to Thee is one of those releases which dwells in that gray area between the LP and EP, and there are undoubtedly those that consider this the first Znöwhite full-length, but in light of its short length (under 17 minutes) and 7 songs, I'm going to consider it an EP for the purpose of this review. Either way, it's the first 'official' release from perhaps the most underrated band ever to hail from Chicago, and a scorcher. Mind you, this is not the crunchy, brutal apocalyptic thrash of their brilliant album Act of God, but a filthier street-level entity with some of the best female vocals of US metal in the 80s (Nicole Lee). The band was a 3-piece here, with Ian Tafoya playing both bass and guitar, and Sparks on the drums.

Several of the tracks here are pretty short, below 2 minutes in length. One gets the impression the band likened themselves to some sort of crossover punk-thrash band, but in truth these are some of the better pieces here. "Sledgehammer" is gutter level thrust thrash with a memorable chorus vocal, wild if simple lead, and then gone in a flash. Like good, hot sex. "Saturday Night" is like a Midwest, female fronted Motörhead, with Lee's air raid vocals elevating it just beyond and one of the other band members gettin' wicked in their with a brief monologue. "Do or Die" is the the shorted, but sweetest as far as frenetic speed/power thrash with a raunchy bite to the riffs and piercing vocal melody.

As for the rest, I'm a little mixed. "Somethin' for Nothin'" has a killer tone, and a decent little breakdown with a descending, muddy thrash riff, but I don't exactly enjoy how Lee's vocals function over the crest of the guitar. "Bringin' the Hammer Down" is actually pretty nice, with a raw, roiling tone and some of the better 'fixin' for a fight' vocals, including some melodic backing from the band. The solo here is pretty cool, as are the little NWOBHM melodies that soar through the violent thrashing. "Never Felt Like This" is probably the closest Znöwhite has ever come to a ballad, really just a slow, straightforward metal tune, but once again, the vocals just aren't that intriguing and the riffs very boring. "Rock City Destination" is another swarthy, blues-rooted bar metal anthem like "Saturday Night", and it's a good closer for the EP.

Nothing this band recorded prior to Act of God would truly prepare me for the crushing wasteland that would ensue, but both the All Hail to Thee and Kick 'Em While Their Down EPs have charms of their own. The kind of charms that resonate from late nights of broken glass, rattling trash can lids, dumpster diving and graffiti from the waste of an inner city. You could consider this a 'Chicago before the bomb' scenario, whereas Act of God represents that period 'after the bomb'. A perfect little Cold War chronology. If it is obscure, raw American speed and thrash that you seek, you could do worse than to check out this band's back catalog.

Posted by autothrall at 9:31 AM