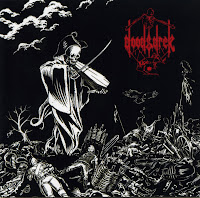 You may be aware on some level of the Belgian band Lugubrum, one of black metal's most interesting unsung acts, who have maintained a rather long and productive career within their odd little niche of earthen, rural black metal. Some of their albums have been more successful than others, granted, but there is little denying the strange can of worms they've opened, a portal to myriad possibilities within an ever stagnating arch-genre, without abandoning its raw and rustic foundations. Doodsdrek is the new project of both Barditus and Svein from that band, and it's nearly the concordant opposite of the goals set out in that band.

This is pretty straight forward, creepy and primitive black metal which does little to innovate or thematically push the boundary. Often it shares Lugubrum's propensity for playing slow, simple tempos ("De Mars der Overtolligen" or the bridge of "De Dode"), but more often it moves at a steady blast ("De Bezetene", "De Verderver") while the harrowing, unconditioned vocals vomit treacherous poetry across the scathing streams of minimal axe composition. The intro and outro to the album are fairly quirky, something I might expect out of their main band: "Verval" is like a doomed 8-bit piece, while "Knoockenriedel" is a morose acoustic instrumental with a wood-like percussion rattling along. Perhaps the best song on the album is "De Vertoornde (i.e. The Torn)", an eerie piece with morbid, skeletal guitars that range from haunted melodies to a steady, bloodthirsty Hellhammer gait.

And that's what it all comes down to, simple old school black metal from the same poisoned well that spawned Burzum, Mayhem, or Darkthrone's unholy trinity of albums. With the exception of the intro, there is little here that is oddly unique, and I do kind of miss that in the sound here, always expecting the music to shift into Lugubrum's world of organic decay. Sadly, while the atmosphere of the album is darkly adequate to the succinct, rotting breaths the band draws forth of its inspirations, the riffs here are simply too inconsequential to provide much duration, and the album ends up another easily forgotten slab of misanthropy that will entertain for under 30 minutes, and keep its tendrils far out of reach of your memory. A fleeting apparition by night. A droplet of ichor in an unending, opaque stream.