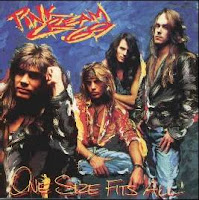 I'm not going to pull any punches here. Pink Cream 69 has got to be the dumbest fucking band name I've ever heard, and if not THE worst, it at least deserves some lifetime metal 'razzie' for its shameful stupidity. Is it a 'cleverly' veiled sex reference? Are the members of Pink Cream 69 sex addicts stuck on dreams of the late 80s flesh and glam rodeos of Warrant and Poison? It would be one thing if this were just some shitty, throwaway glam band like Tuff or Atreyu, but the real tragedy is that Pink Cream 69 are a rather good melodic metal band with only a few forays into the lighter realms of arena/radio rock. In fact, they've maintained a pretty steady quality throughout their 23 years of existence, with only a few dips into mediocrity, due largely to some foolish imperative to 'change' themselves with the shifting tides of 90s.

All told, their best albums are the first three, and this is largely owed to the presence of Andi Deris' vocals. It's true, most people would never have even heard mention of the name Pink Cream 69 had Deris not joined Helloween for Master of the Rings, and he has enjoyed a long and successful sting with that band ever since (for 16 years now), producing a legacy of albums that range from good to outstanding. Honestly, though I loved the primal, nasal whine of a Kai Hansen or the Dickinson/Tate hybrid that was Michael Kiske, it's hard these days not to think of this man as the 'real' voice of Helloween. He's certainly done enough time! At any rate, the things I love about him with his that more popular German outfit are the precise same things I loved about him here: silken, seductive vocals, and a huge range that can impress whether its set to mid-octave cruise control or the measured decay of his upper limits.

One Size Fits All is the band's second album and rock solid; and Andy Deris is not the sole reason. The songs here are well composed, with a flare for both the hard rock drama of the vast, 80s radio market overseas, and the dirty and crunch of roots NWOBHM and European legends like Judas Priest, Accept, Deep Purple, Def Leppard, and more. Of course, it helps that this singer has the rare ability to turn almost any glass of water into wine, and Andy's vocals truly soar across the steady rolling "Talk To the Moon" (imagine Deris had replaced Don Dokken instead of Michael Kiske), or the tasteful speed metal licks of "Hell's Gone Crazy" which is not unlike an earlier Gamma Ray tune: playful, passionate and fully cognizant of a host of 70s and 80s hard rock influences. "Walkin' Out to Heaven" and "Signs of Danger" also paid the bills here, both catchy and expressive, with good leads.

One down side to One Size Fits All could have been the ballads. One or two are always expected, and inevitable having taken even a cursory glance at the cover picture or understanding what style of music Pink Cream 69 were into. But here you got three, with the addition of some clean parts in a few of the other tracks. Fortunately, there are are few singers more capable of pulling these off as an Andi Deris, and they're just as memorable as much of the harder material. "Ballerina" and "Where the Eagle Learns to Fly" are the better of these, but the more uplifting power ballad "We Taught the Children" rocks for much of its length, and is thus not far behind.

Though it's far from perfect, I really can't think of a single song here which fell on its face, and ultimately it's a shame this band did not get more attention than it did. Gee, I wonder why that could be? They don't play a style quite so anthemic as Helloween (or their impersonators Chroming Rose), but fans of Andi Deris in his newer institution will very likely enjoy this, or the self-titled debut, or the 1993 album Games People Play. Fear not. It's not glam, and it's not shite. Instead, Pink Cream 69 were a somewhat thoughtful heavy metal band of the melodic variety, a band of fools who grew up on more theatrical rock influences and mainstream hard rock trappings, and for some reason, could not name their band to save themselves.

Highlights: Talk to the Moon, Hell's Gone Crazy, Where the Eagle Learns to Fly, Signs of Danger