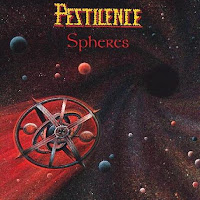 Testimony of the Ancients might have taunted the listener with traces of jazz, progressive rock and other outsourced influences. It might have seemed the beginning of a departure from the brute force of the band's roots in death and thrash metal. But though that album might have rode the rocket out through the solar system, stopping somewhere around Jupiter for a coffee and then turning back to our more immediate neighborhood in the void, the band's 4th full-length Spheres abandons our neck of the universe altogether, building enough thrust to carry it into unexplored pastures. Spheres is the band's 'jazz death' album, and yet it has very little in common with similar forays towards the form by a Cynic or Atheist, or the more spastic, later approach of a Dillinger Escape Plan, or the jazzcore/rap of Candiria.

No, this was something unique, and in hoping to give it that rare spin, Mameli and company recorded it with their 4th producer in four albums: Steve Fontano. Fontano is a more seasoned, diverse knob twiddler than Trapp, Johns, or Burns. He's done everything from R&B to Southern rock to ska in his day, but I'm willing to bet Pestilence were most interested in his work with shred and jazz influenced artists like Tony MacAlpine or Greg Howe. He's done an interesting job with this album. I was surprised to find that it's not as polished sounding as Testimony of the Ancients; there's a particular grit to this journey due to its highly synthesized embellishments. Not KEYBOARDs, mind you, as Patrick Mameli was so adamant to inform us all in the liner notes that no keyboards were used on this recording. Those miserable keyboards, always killing the music, right? No. And considering that the album is so full of synth guitar waves, one wonders what is really the difference, and why one might seem opposed to the use of one, but supportive of the other, especially when the band had used the former in the past. The band had also changed bassists once again, replacing Tony Choy with the equally mesmerizing theory of Jeroen Paul Thesseling, and he's a good fit for this particular album, with his honest 4 and 6-string tones anchoring the spatial chaos that erupts.

The guitar synths actually work well in favor of the album, creating all manner of cosmic vibrations through the more metallic segments. A shimmering array of stars here, just at the edge of a groove. A pulsar out beyond Mameli's leering growls. A black hole sucking in all light through a fusion/rock break. It's fascinating, if you've the patience and wherewithal to let the album absorb you into its manic, extraterrestrial dementia. And it begins with one of its more aggressive expeditions, "Mind Reflections", which creates a sense of terror above its hacking, morbid rhythms and waylaid grooves, the coolest happening before the :40 mark. "Multiple Beings" is a more playful romp across a subdued, melodic thrashing, while the bass pumps away in an almost repressed funk and the synthesized strings interact with Mameli's intonations, stopping only for various fusion bridges. This is quite a good song, though I can see how it would turn someone off from the album if they're expecting "The Process of Suffocation Pt. II".

Revelation, of the inner transformation
Betrayer, of your self-creation

"The Level of Perception" continues to formulate this pattern of excess groove, through a very frightening progression of flowing guitars and spooky synth tones that hover just at the edge of the aggression. The title is only too fitting: the more you focus here, the more you'll get out of it. "Aurian Eyes" is a brief, space opera instrumental conducted through the synths, but "Soul Search" returns to the cutting rhythms, slowly building to a great climax groove at 1:50 where a lead erupts. "Personal Energy" is one of the true highlights of the album, a soothing track with clean guitars and synth that arrives at a fantastic bridge, where the vocals lie partially obscured by the glistening, celestial melodies that conspire to consume them. It's nearly hypnotic, as is the following Patrick Uterwijk free form guitar ambient piece "Voices from Within". The title track is probably the closest to the material on Testimony of the Ancients, with another of the band's solid, simple chord patterns leveraged with a few mind-warping, jazzy partitions.

"Changing Perspectives" is a track much like others on the album, cycling about a series of thrash/grooves saturated in the storms of synth and an arabesque, clean guitar. While it's good, the riffs do not immediately leap out to mind like so many that had come before them. "Phileas" is the last of the three brief instrumentals (as opposed to 8 on the previous album), and while soothing, it's the least interesting. The "Demise of Time" offers closure, one of the crueler tracks as far as the mocking rhythm and otherworldly gore-tone of the vocals. The main verse rhythm is great, and the jazzy segue around 1:20, but the rest is not so memorable.

In addition to their most adventurous, this would also be the 'last' album for Pestilence, until Mameli decided to reform the band for Resurrection Macabre, which sounds like a hybrid of their first three records and completely neglects the sound of Spheres. It's a little hard for me to complain about that choice, as I enjoyed this the least of their original full-lengths. Part of me is actually disappointed that I would not hear a follow-up to this, perhaps under another band name. The music is undeniably fascinating, and I'd be very curious to hear what a further mutation might have wrought through these very same musicians. Still, this is strangely the album that most find 'annoying'. It's melodic and catchy, but I can understand how the rhythmic progressions and common forays into the realm of jazz and fusion would turn off many listeners. Hell, this is the last album I recall which my girlfriend actually demanded I take out of my car CD player because she couldn't bear it. Fucking squares, man! They'll never understand us cats.

Very few traces of death metal remained in the band at this point. The most glaring would be the vocals, which have not changed from Testimony of the Ancients. If anything, they've grown even wilder. And then there are a few of the riffs, which are arguably closer to progressive thrash than anything hinging on brutality. But nevertheless, it's the band's most original excursion into aural atmosphere, and one of the few albums of its type that truly holds up through the years (far more than Atheist's Elements of Unquestionable Presence). In fact, the only other jazz/death love-child I adhere to would be Cynic's more recent effort Traced in Air, which we'd might as well just label progressive rock, though its borne of the same spirit. As far as I'm concerned, Pestilence had already conquered thrash and death metal with the first two albums. After recovering from the shock of their split with Martin Van Drunen, I grew to accept that this was not a band inclined to tread their old proving grounds, and Spheres is the logical and successful extension of this modus operandi. Of course, with Resurrection Macabre, they will actually take a piss all over this pattern, and set up camp right back where they started. But that album is such smashing fun that you'll hardly care.

The bottom line: if you dig jazz, progressive death metal, progressive guitar rock, or outer space in general, Spheres is worth passing some time with while you chew your biscuit and sip your tea, watching the moons and worlds stream past and the stardust shimmer outside your window on the bridge. Make it so!