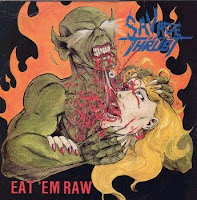 I remember as a teen some girl on my school bus who was pretty heavily into metal, and would often have her hands on a few bands that I just hadn't heard yet at the time. One of these was Savage Thrust, a New York band performing a pretty sporadic and energetic breed of speed and thrash metal that felt like Liege Lord or Overkill, but a little more violent, as if they were high on crack, wanted your wallet and attacking you with garden tools to achieve this goal. She had a few of the band's demos, but I wasn't able to find my own exposure until they released their sole full-length a few years later, Eat 'Em Raw, with the cheesy cover image of a green-skinned demon chomping on some blonde's head on the cover. How could you forget it?

Well, people forgot it. Savage Thrust is just another of those 80s darling should have been, could have been bands that managed to produce one album, perhaps a few years too late to where it might have had the most impact. They certainly had the energy and attitude of the other East Coast bands of the time: the screaming, off the hook vocals, and a set of riffs that were set up to challenge the faster, more violent riffs of the Bay Area scene. Unfortunately, the band hardly excelled at the actual songwriting. Eat 'Em Raw is the type of album you can definitely spin for 'old time's sake' and bang your head until you are ready to pass out, but it doesn't have the staying power of an album like Taking Over or Master Control. In fact, it doesn't have much staying power period.

But that doesn't mean it can't kick your ass in the moment, and the band begins this process immediately with the thrashing ferocity of the cannibalistic title track, awash in blood red tides of bass hammering and harmonic streams that counterpunch the beefy, hungry rhythms of the guitar. The dour "Acid Bath" opens with an amusing take on Metallica's "Orion" intro, as the guitars swell across a sample of bubbling. This is a decent mid-paced track with a lot of 'sinking ship' momentum like a slowed-down, earlier alternative to Helstar or Fates Warning. I enjoyed the atmospheric bridge riff around 1:30, and an Anthrax-like mosh outbreak occurs deeper into the tune. "Speed or Bleed" starts with a car crash, but surprisingly half the track is actually played at a slower pace than expected, while "Madman Marz" just thrashes along at high velocity for its entirety. But the best tracks are actually to come, including "The Vice" which features some pretty killer hooks and some of Mike Smith's better vocals on the album, as they seem to be lowered in to fit amongst the music better. The closer "Seed of Demon" is a solid thrash brute that would appeal to fans of Overkill, Evildead and the like.

So, nothing highly unique about Savage Thrust, but they were a band that knew what they were doing, and despite their inability to write stunning guitar riffs, they were able to craft songs that had enough virulent energy that you never got a chance to really think about any lack of long term adequacy. You could easily some of this material into a mix of mid to late 80s, raw US thrash, speed or power metal and it would fit wonderfully. I know this band has had a few reunion shows about a decade ago, so there is always the possibility of new material one day, but like the ill-fated Eat 'Em Raw, it will probably just be too late to matter.