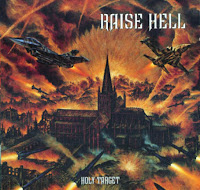 Raise Hell's 1998 debut album Holy Target may not seem all that extraordinary for its day, being heavily influenced by the sounds of Dissection's Storm of the Lights Bane and other melodic Swedish black metal acts like Lord Belial or Sacramentum. However, it does serve as an exception to the band's discography, as they would rather quickly shift their focus towards a fun black/thrash hybrid as soon as the sophomore effort Not Dead Yet. You could, however, trace this transformation back to the debut, because in betwixt the straight up blasting Dark Funeral frenzy and bleeding, unsubtle devotion to melodies, you'll definitely hear a speed/thrash embryo kicking at the sides of its blackened womb.

Holy Target is no exception to quality, though, and Raise Hell have long surprised me as one of those bands with every shred of potential which somehow breakthrough success has overlooked. As early as this album, the Swedes were writing fairly strong material, with a more accessible edge to it than countrymen like Dissection or Dark Funeral, and with a three-record deal through Nuclear Blast records, expectations were high. Perhaps the 'fun factor' I have always felt with this band has somehow hindered them, as they feel like a meter of 'blasphemy lite'. The lyrics feel like a representation of faux-Satanism at its worst, crafted solely to identify the band's music within a larger underground movement that could provide a built-in listenership. This air of blasphemy lends itself to a number of tracks here, like "Raise the Devil", "Superior Powers", "Legions of creeps" and "Beautiful as Fire", but the band also delves in violent death/thrash fare like serial killers and so forth. Personally, I find the Satanic elements to this record hammy, and I greatly prefer the more sexual and silly direction they take with the following album, but at least the lyrics are something once can get into.

As for the music, it's a fairly bewildering storm of serpentine storm beats and streaming chords of fell glory, more immediately catchy than Storm of the Light's Bane or Vobiscum Sathanas if lacking some of their eventual depth. "Raise the Devil" and "Holy Target" are good examples of their more ferocious, warlike melody and incessant burning of energy. The former has some outbreaks of viral Kreator-like thrash (the early bridge around :20) and the latter has a bit of a Bathory influence in its depths (Blood Fire Death era), but otherwise they both explode like abyssal artillery, lobbing fire at the wheeling circles of angels above. There are better songs, though, including "Beautiful as Fire" with riffs reminiscent of a less muddled Sabbat (UK), or the beautiful thrashing violence that sets up "Black Visions", frenetic leads streaming across the harsher barrage beneath. "The Red Ripper" breaks out into a total killer mid-paced thrashing, and both "Mattered Out" and "Superior Powers" are pure punishment glazed in severe riffing ability and Jonas Nilsson's despotic throat.

The album was mixed at Abyss Studios in Sweden by Tommy Tägtgren, and it holds up very well, the blood soaked battlefield of a timeless, metaphysical slaughter. The bass might feel somewhat subdued, but this is largely due to the razor sharp attack of the guitars and the incredible storm of Dennis Ekdahl's drumming (he's also played in Sins of Omission, Mystic Prophecy and Siebenbürgen). As for the compositions themselves, few if any truly stand out to memory, though the album is a pleasure to listen to when you seek a dependable black attack with some melody, and higher production values than many in the scene have mustered. The big label visibility and rather trendy style of this album might have made it a 'holy target' in the eyes of many an underground purist fan who would picket anything that even bordered on financial plausibility or general accessibility beyond the cult black metal crowd, but it's still a fresh blast of carnage you can enjoy alongside the other would-be giants in Dawn, Sacramentum, Mörk Gryning, The Crown and so forth.