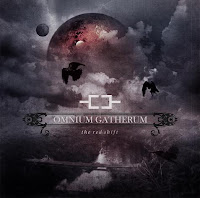 Whereas Stuck Here on Snake's Way felt like a more simplified, subtle effort than anything the band had released prior, it wound up winning me over due to the memorable mesh of the riffs and synthesizers. The Redshift comes out firing immediately, and it essentially returns the band to where they were at with Spirits and August Light, only with Jukka's vocals and a much cleaner production altogether courtesy of a solid Dan Swanö mix at Unisound. But the guitars are lighter here like Stuck Here on Snake's Way, and the album has an overall less chunky appeal than the band's 2003 full-length debut.

Unfortunately, it's just not all that great. While I have no doubt that The Redshift is probably the band's most focused, seasoned work, there is simply something about it that did not last me very long. The playing is pinpoint accurate, the atmospheres balance themselves well between the charging riffs and the tranquil segues, and the lyrics continue their journey along a minimal, poetic route that leaves the listener with much introspection to fill in the spaces. But The Redshift is...in a word...dull. Almost every song moves along at a predictable pace, with nary a single catchy melody lurking around any corner. The songs filter safely through the brain and out the waste valves as if they had never existed, almost ghostlike in their delivery, as if the album doesn't want to exist. All of the album's catchier moments seem to dwell outside the metal music entirely, when the band is performing transient clean sing-a-longs over streaming melodic chords as in "No Breaking Point" or the mellow and depressing "Greeneyes".

I'm not saying there aren't distinct attempts to try and lunge forward and grab the listener by the collar, as a good percentage of the 11 tracks is spent in momentum like "The Second Flame", "The Redshifter", "Chameleon Skin" or "The Return", but none of these were able to contain my attention, and the album quickly became a less interesting alternative to the many bands out there who perform the melodic death with keyboards with far more aggression and hooks that sink deep in the flesh rather than deflecting off the skull as a cursory blow. Everything about The Redshift is level, super polished and sterile despite numerous attempts at emotional resonance, and the album had the equivalent impact of the dour and forgettable Years in Waste.

Omnium Gatherum is a band I had high hopes for after their first full-length, but they appear to ever huddle at the edge of a breakthrough, perhaps playing it too tidy and safe for anyone who is not a melodic, progressive death metal enthusiast to pay much attention to. There is nothing offensive about The Redshift, it is not a poorly written or necessarily bad effort, and the clean production alone will probably impress those who think music like Nightingale, Sonata Arctica, or the 2nd Crimson album from Edge of Sanity is the bee's knees. But there is simply no lasting impression. The band is not as wild or furious as Kalmah and Children of Bodom, not as emotionally powerful as Insomnium, not even as spring-coiled with 'THIS MALL KNOWS HOW TO ROCK' attitude as Soilwork or In Flames. They've already written a pair of fine albums, but until they can pen a real scorcher, they'll just have to gestate a little more in their collective, creative womb.