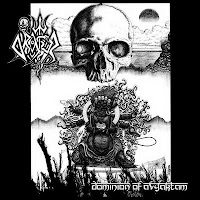 I've had very little exposure to the metal bands of Bangladesh, and even those few I've heard, such as Warfaze or Cryptic Fate play more in the style of traditional metal. However, it is only natural to assume that there must be an undercurrent of more extreme bands out there playing death or black metal, and thus far, Orator is one of them, performing a style that is dominantly death metal with its roots deep in primal, barbaric thrash rhythm. I should note that, while Dominion of Avyaktam is the first release from this band, they are not exactly new. They were formerly known as Barzak, and under that banner they played in a similar vein, only with a more direct black metal influence.

Call it the globalist in me, or the cultural troubadour I am when it comes to seeking out new sounds, but the first thing I always hope for when hearing a band from some far off country is a native, cultural influence. To this extent, Orator do fulfill. Their lyrics and music are inspired by tantra used to honor their ancestors, and they more or less incorporate its values directly into the compositions. This manifests most clearly in the intro and outro pieces to the EP. "Vyakta" fashions a descending guitar above percussion and bass, and "Avyatka" follows suit. Though they are effective, neither is truly that interesting, as the riffs are just too simple and unmemorable that the percussion is the only element to really draw in the ear. There is another vocal track, "Samhara Tandava", which follows a similar process, with the snarls added in. These ritualistic tangents actually reminded me of an Asian response to Sepultura's tribal ventures.

And, like Sepultura, the rest of the tracks are pretty straight death/thrash metal, with only a touch of the cultural mystique woven throughout, like the almost hypnotic bass line that closes "God to the Strong, Master to the Slave" or the chanting samples throughout "Liberation Through Shva Sadhana". Most of the songs have pretty average riffing that doesn't really do the band's intentions justice on this release, though the guitars are mixed powerfully alongside the present bass and drums that range from fast thrash beats to rolling double kick and a mid-blast. The solos are usually pretty good, with a serpentine South Asian vibe, and in my opinion the best song is "Supplication to the Tower of Nihilifer", which overcomes an underwhelming grind rhythm at the onset to spread like poison through the creepy, echoing vocal breaks and Krisiun styled butchery. The vocals are great on this, a tormented guttural from the gut which carries forward great, focused pain and perhaps benefits from the accent.

But the band Orator will likely draw the most comparisons to is Singapore's Rudra, who balance a similar blend of thrash and death metal with their own atavistic fascination. Orator are a far simpler outfit at this point, but then, they don't have the weight of a half dozen albums under their belt. It's always positive to hear a band like this incorporate a piece of themselves into the music beyond just their black, death or thrash metal record collections. Orator have the geography, climate, spiritualism and history to create some very intriguing music, but I'd like to hear them reach even further into it, beyond just the tribal, tantric tones of a few standalone tracks, and incorporate this through more of the metal rhythms. This, and some tightened, superior riff writing could make them a new force in aural Asian violence.

http://www.myspace.com/barzakdeath (for Barzak, check later for a new Orator page)
Posted by autothrall at 7:32 AM