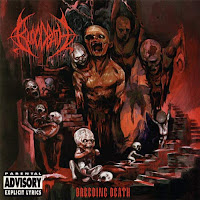 Born of the minds of several of Sweden's most prominent metal musicians of the 90s, Bloodbath seemed poised for success from the moment of its conception, before even a track was laid down in the studio. That the four principals were all well acclimated to one another, and writing music here that came as a stark contrast to their more mainstream friendly outfits (Katatonia, Nightingale, and Opeth) was all the more reason for its existence. Jonas Renkse, Mikael Åkerfeldt, Dan Swanö, and Anders Nyström owe a lot to death metal. Its migration throughout Europe and the States (and beyond) is what led to their individual success in other projects. It's the camel they rode in on, regardless of whatever mutations their better known bands have undergone in the past decade or so.

That the debut with this project would be an EP titled Breeding Death seems rather obvious, and a wise decision to test the waters with a few tracks before committing to a larger project which would involve tours and several albums (having now all come to fruition). The goal here was to adapt the roots Swedish death metal of Grave, Entombed, Edge of Sanity, Unleashed, Hypocrisy, Grotesque and Dismember into the digestive tract of the big Y2K, and though they cannot be chiefly accredited with this sub-genre's rebirth and the inevitable scores of bands who would flock back to the style's dark waters in the 21st century, they certainly played their parts, on a high visibility label (Century Media) and reaping in many thousands of fans of their other bands to a sound they might have otherwise ignored. And in some, sad cases, a sound they probably ignore to this day outside of Bloodbath. It's true that bands like Vomitory, Fleshcrawl, Paganizer, Kaamos and their ilk had been kicking around the Swedish flavors already by this time, among others, but none have been quite able to break through.

In some ways, Bloodbath resembles its constituent members' other work through their individual roles. Mikael Åkerfeldt performs his fabled low end Opeth growling here without any need for 10+ minute long songs and vast acoustic interludes, and the others peep in once in awhile (all vocalists in their own right). Jonas and Dan return to the rhythm section they were once all too comfortable with, and Anders is in the drivers' seat with a slew of riffs that would do Grave or Dismember proud in 1990, with a little of the added atmospheric spin he might have picked up in his years of Diabolical Masquerade and Katatonia. Still, with all of the talent and the history behind the members, the compositions themselves fall rather flat.

Surely there are huge grooves and surges into the unbridled, old school riffing style that once made the format such an ominous venture into extremity. But it definitely edges on the 'been there, done that, not going to do it any better' mentality which might comfort the majority of retro death metal outfits, but doesn't offer much towards the more seasoned listener who might expect some manner of tweak to the genre. To be fair, this is the larval stage of the band, and their future full-lengths all manage to destroy this material, but "Breeding Death" and "Furnace Funeral" do little more than offer some standard, thick riffs over Mikael's level vocal battery that becomes somewhat monotonous. This guy's inflection is no Martin van Drunen or Chris Reifert, and it's no wonder he uses a lot more cleans in his other band. The middle track here, "Ominous Bloodvomit" benefits from a slightly cooler riff and thrust, and a nice mean groove that conjured up earlier Obituary, though it does sputter out into generic, brute filler at one point. The end of the track picks back up, however, and I found it the most memorable of the three.

Regardless of my own lukewarm reaction to this project's first offering, it is a success from the technical standpoints: semi-famous musicians getting together and rocking out a few old school tracks; delivering a modern and dark, if not distinct production; and building some excitement for a return to the style's halcyon days which were probably too quickly forgotten. Fuck, many of the great cult acts of the early Swedish death scene STILL lie in obscurity! Poor, poor Gorement. If you already own and enjoy Bloodbath's full-lengths like The Fathomless Mastery or Resurrection Through Carnage, then this EP is a curiosity that might be worth a few bucks. But if you haven't heard them at all, start with one of those albums first. One of the pressings of Resurrection Through Carnage even comes with Breeding Death as a bonus.