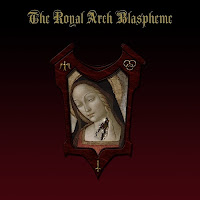 Neill Jameson has been a card carrying member of the US extreme metal underground for as long (no, longer) as I've been writing about it. In fact, I believe I once interviewed him for an old black/white print 'zine I once worked on at university in the 90s. But you probably know him best by his other names: Imperial. Lord Imperial. Or N. Imperial. His first breakthrough act was Krieg (formerly Imperial), through which he has now accrued an extensive discography, including cult US faves like Destruction Ritual and The Black House. But you may also know him through other acts he's been involved with: Hidden, Judas Iscariot (live), Weltmacht, Nachtmystium, March into the Sea, or the USBM collaboration Twilight.

Some of these projects have produced some excellent material, some still do, and some I could live without and lose not a single wink of sleep, but The Royal Arch Blaspheme is perhaps the best output I've heard from this man in years. And here's the catch: he's only the vocalist. The musical backdrop is all performed by John Gelso, a name associated through the years with Profanatica and some even more obscure acts (Contravisti, Toten, and others). This is a marriage forged in hell, another of those rare acts that successfully strips away much of the needless excess from the past 20 years of extreme metal, to deliver a disconcerting, wicked experience that hammers itself past the manifold layers of skin and bone, to the soft, innocent flesh of the brain beneath.

Though the aesthetic here is clearly that of primitive black metal, one could just as easily make a death metal argument for this record. Gelso's guitars produce some of the most despotic, repugnant old school rhythms I've heard in recent memory, enriched through the morbid, crushing influence of the masters (Incantation, old Death, Autopsy, etc.) But these are not enough, and in a track like "Isaiah 14:12" you'll experience what is exceptional about this project: the atmosphere often crafted through a swelling, melodic guitar harmony in the background. Across this visceral turmoil, Imperial's vocals retch, a caustic belch of bloodcurdling snarls that enchant like the transfixed stare of the executioner behind his hood. A wide range of emotional export is hardly necessary for this album, so Jameson is the perfect pilot for this abyssal aircraft.

If The Royal Arch Blaspheme were only some weekend hangout with little to no organization, it would still be entertaining. But Gelso and Jameson have something the garage or basement black metal duo cannot emulate: the craft of song. It seems each fibrous, infernal hymn here is laden with just enough charisma and dynamic balance to maintain the listener's attention. Tracks like "Alchemist", "Dead Eucharist" and "Jahbulon" writhe with a volatile passion almost unrivaled among the lazarus hordes of old school pundits, fueled only by hell and spite and the mockery of holy foolishness. Imperial's voice is like the dirt of a grave stirring, writhing with worms and the charnel, half-empty smile of an ascending skull. Need something slower? "Kingdom of Perversions" will KILL you, as it glistens with the fresh blood of angels, their cries heard through the shrill samples that bridge the sluggish verses. Need something faster? Try on the "Seven Devils of Ejaculation".

Highlights: Come one, come all to the slaughter.