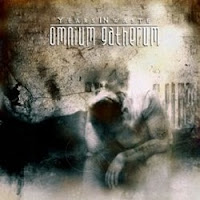 My first impression upon listening to Omnium Gatherum's 2nd full length offering was something akin to 'damn, it didn't take that train long to run off its tracks'. A good example of promise and momentum gone sour and sluggish, the album seemed a mere mix of boxy, heavier guitars than its predecessor, and brief segues of the keyboard tinted progressive metal that the band had been whittling away on the previous two releases. I've since gone back to the album a few times, hoping there was something I missed, and while I've come to appreciate a few of the songs, no really deep connection can be made.

But perhaps in titling the album Years in Waste, the band were attempting to warn us that it would be a few years until we would once again hear the level of songwriting the band had emitted on Spirits and August Light. It's hard to glean a difference at first, as "The Fall Went Right Through Here" is a strong enough opening track, which introduces us to the band's more clear and present guitar tone, which stands out a little further from the keyboard atmospheres than the previous effort. There are some fine descending synth lines here, and a nice melodic/chug breakdown, and the track does get ones hopes up that the band have at least remained consistent. "Waste of Bereavement" begins with a decent, if typical melodic death battery the likes of which you'd hear from any random band performing in the style, but the only parts of the track which really called to me were the subtle synth textures over the low-down, bridge, which add the flavor of mystique to what is otherwise your standard Swedish melodeath or US metalcore/melodeath bite-off.

At this point you've heard almost all this album will attempt to offer you. "Misanthropic (Let the Crown Fall)" once again tries to hammer you with heavier guitars, streaming octave chords and synth glaze, but despite its fluidity it doesn't stand out until the melodic guitars of the bridge, and by this point Filppu's vocals are almost ineffective (as they were with much of Stealing the Light), especially when he starts his little storm of cussing dialogue around 2:30, which is something Phil Anselmo might do to spice up a track, but seems juvenile and out of place for Omnium Gatherum. "Black Seas City" sees the band try their hand at a more progressive metal overtone, with clean guitars and a somber synth passage that creates a lot of atmosphere before the guitars bristle forth with majestic melodies. I actually found this to be the single best song on this album, and the most emotional, though the vocals are once again a minor hindrance as he just gets lost in the well balanced mix of instruments.

"It's a Long Night" has a few catchy twists to its dominating rhythm, and "No Moon & No Queen" some provides a reasonably epic stop/start momentum and a slew of shining crystalline melody through the guitars, but at the best they both feel like less successful attempts at Soilwork's Natural Born Chaos, with better production but less impact. "Gravesilence" begins with a heavier, Opeth-like pace to the guitars, and it moves pretty nicely until its less than spectacular thrashing verse. "Nolan's Fati" too has some half-decent guitar work within, but there's nothing impressive awaiting around any corner, and "More Withering" is a slower, atmospheric track which sounds like a midpoint between Soilwork and Amorphis, with the exception of the vocals. This one actually had some potential, though it lacks that extra punch. The album closes with "Auguries Gone", which seemed like a pretty generic melodic death track with a thick, Fear Factory riff inserted between some of the more spry, bouncing guitars.

I will say that the mix here is a lot cleaner than Spirits and August Light, and I would love to have heard that album with this production, though I think the vocals occasionally do feel like they are struggling against the far more talented musicians. Though the album still feels like a mediocre step backwards 6 years after its release, I don't actually hate Years in Waste. Clearly the band put some work into making the compositions fluid and exciting, they just forgot to add memorable riffs about 50% of the time. I still enjoyed a lot of points where the synths intersect with specific rhythms, and I admire that Omnium Gatherum have always been able to relegate them to the background without reducing their importance or function. As far as career missteps, Years in Waste is not as bad as most, but it would be a few years before the band could answer for it.

Verdict: Indifference [6/10] (love was not a glance away)