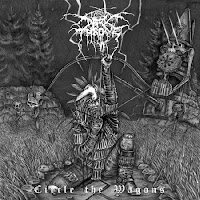 Of all the many metal bands in the universe, there are an immense number that I enjoy, but far fewer that I consider myself such a fanboy as to 'line up' for. Or to eagerly anticipate the dropping of each album. Darkthrone is one of those bands. I'll watch or read the band's interviews in advance of the next album. I'll download the cover art and set it as wallpaper. I'll download the samples. I'll order the CD. I'll order the vinyl. And it all stems from how reliable the band has been in their delivery over the past 20 years. No rock star pedestal. No trends. No nonsense. Just two guys recording metal albums that are important to them, and typically also important to me. They've made slight developments in their formula through the years, and I've hung along for each and every transition, because I trust the band completely and they rarely fail to impress me.

2008's Dark Thrones and Black Flags was my favorite metal album that year, and it's one I still have playing in a fairly frequent rotation today. From the self-referential lyrics to the amazing fabric of the vocals and riffs (the first few ringing guitar lines of "The Winds They Called the Dungeon Shaker" are all you need to sample to hear just how fantastic that album was), I was hooked, and I really consider it one of their very best efforts alongside the classics like Transilvanian Hunger and A Blaze in the Northern Sky (with many others close behind). For their 15th album, Circle the Wagons, they have come up with both an intriguing and original title and cover concept, with a Native American theme that seems somewhat unusual. This aesthetic is primarily reflected in the title track and cover art, however, as the lyrics cover a variety of topics and more of the band's poorly veiled references to metal music at large.

The biggest distinction to this new album is that the band have slightly shifted away from the more punk-dominated songwriting of F.O.A.D. and Dark Thrones and Black Flags towards an infusion of classic metal riffing and primordial thrash. But if you enjoyed those albums, fear not, because the sound here is much the same, there's still a touch of the punk energy, and the band continues to share the vocal duties. What's more, the band have taken their occasional use of clean vocals to a new height here, as in the title track, which serves as another metaphor for the band's path, with some extremely entertaining dual clean vocals that make for one of the most memorable bits on the album. The guitars, too, are notably derived more from a wider host of muddy, primal 80s heavy and thrash metal influences than the usual Celtic Frost/Bathory blood that has steadily beaten through Darkthrone's heart for decades.

Unlike Dark Thrones and Black Flags, I didn't quite take to every single song on this album. It's a little disappointing, and it doesn't really belong in the top tier of the band's discography. But it's still a lot of fun to listen through, and several of the tracks are exceptional. "Stylized Corpse", one of the darker songs on the album, and perhaps the closest to some of the band's older, 90s material, was one of my early favorites, with its slow escalation of the grooving Hellhammer inspired verse rhythm and the dense jangling of the bridge riff. There are also some killer breakdowns waiting within, one leading to a majestic and minimal melodic tension. "Black Mountain Totem" is also huge for its unforgettable plucky thrashing and the disturbing, decaying vocals of Nocturno Culto, spackled in speed metal fervor. "Eyes Burst at Dawn" is another rager, with some amazing, manly clean vocals ala "Dungeon Shaker" from the previous album, and some of the best melodic riffing on the album (that bridge kills). And it would be foolish to not mention "Bränn Inte Slottet", a very different instrumental track which begins with ritual drumming over a looped chanting sample, then picking up into simple but effective old school metal riffs akin to the rest of the album, and a little taste of doom.

A few of the other tracks also satisfy, though not as strongly. "Running for Borders" has a cruel twist to the guitar rhythms that builds a strong momentum under the vocals, and "I Am the Working Class" shakes out just enough punky perspiration to inspire. As for the opener "Those Treasures Will Never Befall You", I enjoyed it enough as a light appetizer, but aside from the great bridge section with the somber guitar melody and the raging bass pomp, it didn't sink in as deeply into my skin. The same goes for "I am the Graves of the 80s", which seems like a fun enough tribute with some soaring, clean vocals, but failed to blast me out of my seat. "Circle of the Wagons" itself did little for me with its punk momentum, but the clean vocals are at least entertaining, especially hearing just how far these guys wanted to take it this time.

Yet, I still find myself singing along, even to these. And despite my failed connection with a few of the tunes, it's still a Darkthrone album. As many of us are aware, even on its worst day this band is more impressive than nearly anyone else releasing records in the 21st century. That they've so successfully let the trends of the past 15-20 years slide off their armor and kept their career afloat is a testament to both their devotion to sounds that never quite should have died, and to the fans who still celebrate them above all the awful, modern setbacks that metal has suffered (nu metal, soulless tech death wankery, commercial metalcore, bad thrash throwbacks, hipster coffee shop metal, and so on). Circle the Wagons is immensely enjoyable, provided you are open to the band's adventures and don't care that it's not a direct re-write of Under a Funeral Moon. There's no "Hiking Metal Punks", "The Winds They Called the Dungeon Shaker" or even a "Witch Ghetto" here. But some of the songs are mighty close. It's like a 'bases loaded' situation, with a few single hitters driving up the score, rather than the outright home run with everyone screaming from the rafters that I felt of the last album.

Bränn Inte Slottet felt kind of like filler to me.

It's pretty cool. Certainly not something they've done before.