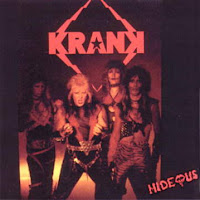 Like most other people, or rather, the few people that can actually remember the band, my first exposure to Krank was due to their appearance on the Best of Metal Blade 2 compilation, which I happened to own on cassette. The song "Rented Heat" was almost laughable as far as the lyrical content, and yet, I found it a strangely compelling, blue collar, no nonsense statement of rebellion and unrest. Tracking down their debut Hideous was no easy chore, for it seemed like a half dozen Earthlings at best seemed to recall or even care for their music. I was really taken in with Frank Tyson's vocals, which were like a higher pitched John Bush (Armored Saint), but had this streak of cruelty to them which still remains distinct.

Musically, the band are probably best compared to Twisted Sister, with a heavy, blues tinged motif that can transition from the bold power chord crunch to the sleaze of the strip club rest room with a flick of the wrist. Image was a pretty important component of this band's approach, and one glance at the cover art will reveal tight animal pants and hair that probably opened holes in the sky. As a result, like so many other bands that flirted along the edge of the glam realm, the music does feel like it often suffers, taking a back seat to the attitude. There are a few standout tracks that deliver both catchy, balls out front riffs and fun lyrics, but the rest feel like so much filler we've heard before from a large number of 70s and 80s hard rock outfits.

Of course, "Rented Heat" was selected for that Metal Blade compilation for good reason...it's the very best song on this record, and having heard the more recent Ugly Gift album in 2003, it's the best of their career. An extremely catchy, nastily paced slow metal riff in the vein of Def Leppard or Twisted Sister, dowsed in a highly charismatic vocal performance, both the lead and backups. I jest not. This song could easily have been at the level of a "Burn in Hell" or Quiet Riot's "Bang Your Head", had it reached a similar level of exposure. The solo is great, the cautionary melody that develops around 3:10, as the track is winding to a close beyond the third verse, and the lyrics extremely entertaining, like a Motley Crue, WASP or Skid Row:

They hauled my ass into city court, wouldn’t even say what I’d done
I was supposed to be judged by my peers, I didn’t see one...
The lawyer said my client was the victim of abuse
That judge looked me in the eye and said there’s no excuse!

It really is a fun track, and had the rest of the material here been as well conceived and delivered, this album could have developed a pretty massive profile. That's not to say that any of the songs are really 'bad', and in fact a number of them have at least a solid vocal performance, like "No More Lies", "Evil" and "Nasty Habits" (which wins the bronze medal here after "Rented Heat" and the surging "Power"). The real problem is the predictable, and generic blues swagger that infests so many of the riffs. Even in "Nasty Habits", the guys are easily forgotten until the chorus picks up the speed. But, take something like the thudding bass and fun hot summer scorch riffing of "Power"or "Hideous (Heavy Metal Havoc), and then compare it to some of the more sallow, everyman riffs and you can count the peaks and valleys.

As for the mix, I love it. Pure 80s sound which felt warm on cassette or vinyl, and loses nothing important through a CD or digital file. The guitars have this nice, light distortion to them that mirrors a lot of the hard rock and 'fluff' metal of the period, and the drums crash with abandon. Tyson is the centerpiece, with enough charisma to place him among the Dee Sniders and Kevin DuBrows of the world, and I can only imagine how cool this guy could come off over a heavier set of riffs. I absolutely recommend that anyone who enjoys fun 80s metal check out the song "Rented Heat", and maybe the entire album if you're so inclined. Don't mistake me here, Krank were better than about 90% of the glam crap MTV and other major sources were pushing, and far heavier. I would take this band any day over Nelson, Firehouse and Winger. But as a whole, the band simply didn't not stand head and shoulders above the pack, instead tucked snugly within its folds, and at best this could have been one of those lucky bands that got an occasional opening slot for the L.A. Guns, Warrant or Poison, put on a thoroughly entertaining show, and then sadly forgotten the next week by the big haired interlopers who were more focused on Bret Michaels package and CC Devile's dwarf-like dancing than the superior opening act.