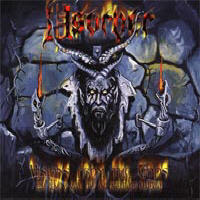 Thrilled as Necropolis must have been with the unruly beast they had on their hands with the Threshold of the Usurper EP and the ensuing Skeletal Season, they decided that the new millennium should herald the dawn of not one, but two new Usurper releases: the mighty third album Necronemesis, and the Visions from the Gods compilation, which collects together the band's original demo of the same name, and some additional outtakes and bonus tracks that had not previously seen the light of day. In other words, it's a chance for fans who missed the limited run of the demo to now hold in their hands a complete collection of the Chicago bands recorded output.

If you'd been privy to the band's prior releases, then it would not surprise you to hear that their monolithic, morbid tones were already well established for the 1994 Visions from the Gods demo, which is included here in all its unglory. Just compare this to the demo of almost any other cult black or thrash metal act, and come away stunned by how dark and bold they sounded. Two of these tracks, "Deep in the Forest" and "Dusk" had been released also as a part of the debut album Diabolosis, so this runs the risk of some limited redundancy, but if you're deep into some obsession for this band, you probably appreciate having them here in their early form. The other tracks, "Soulstalker" and "Visions from the Gods" are both excellent, simple affairs that run parallel to the debut material, and they've also included a 1996 'upgrade' to "Soulstalker" which delivers and even more forceful punishment.

The goods do not end here! You get a demo version of the track "Anno Satanas" which appeared on the Headbangers Against Disco Vol. 2 7" (along with Swedish bands Unpure and Nifelheim). Truly a phenomenal song, with a manly, distant chant mirroring Diabolical Slaughter's libation to Tom G. Warrior. Continuing a trend they started with the Threshold of the Usurper EP, you get another cover of everyone's favorite Dane, only here it's his work in King Diamond rather than Mercyful Fate. "Charon" is culled from the excellent Fatal Portrait album, and once again they make it their own, with huger chugging guitars. Does it lose a little of the original's grace? Sure, but Usurper are all about taking grace and shoving it where the sun don't shine. There's also an alternate, super fuzzy version of "Wolflord" from the Skeletal Season album, and a crushing, unreleased track called "Bonefire" which reeks of sheer barbarity, especially when Slaughter erupts into that guttural vocal. Rounding out the grisly festivities, a live track, "Warriors of Iron and Rust" (the studio version would be found on Necronemesis), which, though distant, sounds like the band were pretty tight that night.

Visions from the Gods is not necessarily a complete value, but it's on par if not better than many other compilations of a similar nature, because it does offer a few tidbits you haven't heard before, and in most cases, they are pretty good. I am especially partial to "Soulstalker '96" and "Bonefire", but it's also cool to have the original demo. If you enjoyed any of the band's work up to this point, love Usurper, and don't mind shelling out some money and getting a few tracks you've already heard mixed in with a King Diamond cover, alternate versions and an unreleased tune, then go on and cough it up. Otherwise, the bread is better spent on one of the studio albums, or the Threshold of the Usurper EP.