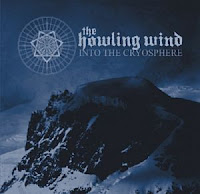 The Howling Wind is a very interesting cross-country collaboration by two members having served time in other US cult metal acts: Ryan Lipynsky, aka Killusion was a member of the seminal, deep NY black metal act Thralldom, but is better known as the vocalist and guitarist for Unearthly Trance. Parasitus Nex also works with Oregon death fiends Splatterhouse and The Warwolves as their vocalist, but plays the drums here. The style these two conjure on this sophomore outing Into the Cryosphere is one of relative novelty: black metal infused with elements of doom and sludge metal, without any loss to the gnarled, bitter core.

The band is clearly into both brutality and isolation, as the bleak wintry scape of the cover mountain infers to the viewer. The music is a pretty pure reflection of this, with a resonant, cavernous feel to it that feels as if it being shouted at the listener from the depths of some rime-touched valley. The hostility and density of the guitar tones are to be admired, especially when they pick up into a more punkish/black/death onslaught like "Ice Cracking in the Abyss" where the vocals really shine due to their frigid atrophy. The beats range from a competent blasting to a slower, doomed crawl like "Will is the Only Fire Under an Avalanche". But despite the range and reach, and the killer, meaty tones the band evokes, I actually didn't find the material all that interesting until the two final songs. "Impossible Eternity" is a woeful dirge of monumental, crushing force, like a glacier slowly moving over your legs while you remain attached to them, agape in horror and unable to move until an EMT arrives with a bone saw. Loved the almost psychedelic desolation this song creates. The closer "A Dead Galaxy Mirrored in an Icy Mirage" is pretty quick, just over 2 minutes in length, but it too marries an oppressive atmosphere to a stream of dense, post-core black hooks that reel in the listener, especially when it picks up in speed to a schizophrenic blasting.

The Howling Wind is basically the perfect metal soundtrack to a movie like The Thing, where there is just no fucking hope and you should expect no quarter from the harshness of nature and evolution. While I enjoyed the atmosphere of almost the entire album, I simply didn't care for most of the riffs, with a few exceptions like the bruising "Teeth of Frost" or the others I mentioned previously. I can certainly see fans of such wide ranging artists as Tombs or Soilent Green snatching this album up, but I couldn't make a connection with half the songs. At any rate, Into the Cryosphere does seem like a pair of veterans feeling out a very specific vision, and the music reflects this. I can only hope the band will explore their more interesting, perturbing, discordant elements in the future, for an even colder sound, and lay off some of the more basal, uninteresting black/sludge riffs that litter the record.