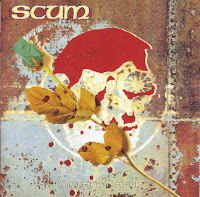 There are numerous bands to have borne the name Scum through the years, but this particular Scum was a Finnish death metal act that released two albums through Black Mark before disappearing into the annals of 90s death metal, likely to be dug up only by those grave robbers of the internet some years later. Considering the general success of their label in that decade, thanks to acts like Bathory, Edge of Sanity, Morgana LeFay, Necrophobic and Lake of Tears, one wonders why the younger bands of the roster never quite broke out...

At any rate, Scum were not a particularly competent band on their debut Mother Nature, performing a simplistic brand of crunchy death metal, through extremely basal chugging rhythms. However, what they lacked for in sheer riffing capacity, they tried to make up for with their subtle use of melody, and the crushing, Martin van Drunen-like larynx of frontman P.T. Askola. In fact, their sound most reminds me of a proposed mix of Asphyx and Tiamat. The bludgeoning, neanderthal grooves and chomping of the former, married to the subtle gothic death flourish of the latter on albums like The Astral Sleep or Clouds, all adorned with the ritual barbarism of Askola's blunt throat.

I'll re-iterate that the album contains very little in the way of quality riffing, but it's difficult not to get caught up in the prehistoric atmosphere of a "Voyage Into Depth of Insanity" or the carnal butchery of the "Macabre Moors of Morgoth", both of which take a breather from non-stop chugging madness through brief segues of clean guitar and cavorting bass grooves. "Mother Nature" is all gloom and death/doom, and perhaps the finest single track on this recording. "Shadow Hunting" opens with an eerie, descending guitar tap that morphs into a slithering melody below the vocal, and "Final Vision" feels like a very rugged approximation of early Tiamat, with melodies inflected through the big, burgeoning grooves. A few of the songs didn't necessarily strike gold, like the thrashing "Sickness Prevails" (though it has a nifty little Pestilence styled riff in there) or the opener "Creation of Flesh".

For the most part, the album rocks pretty hard, that is if you don't mind the band's crudeness and lack of innovation in anything but the implied atmosphere of their writing. The mix is fairly raw, but it only adds to the records charm, rather than sapping away at it. As for the cover of the Animals' "House of the Rising Sun", well I suppose it was a novel idea to include on a death metal album in 1994, and you do get the impression through the band's lyrics and titles that they're a bit hippie, a stereotype further enforced by their following album Purple Dreams and Magic Poems. Recommended to fans of the first few Asphyx of Tiamat albums, or perhaps other primal Finnish death metal acts like early Belial or Adramelech, or anyone seeking to trip out on a bit of obscure, brutal nostalgia.