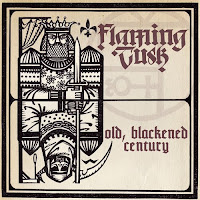 Time to face facts. Metal is such a massively oversaturated realm, with many thousands of artists stacked into each of its constituent genres, that even the majority of artists exploring its most extreme wings feel tired and conventional these days, unless a band is simply superb at what they do. Black, death, doom, grind and sludge have all come and gone, come again in endless cycles, and it's left to a newer, younger generation of bands to transcribe some novel translation of their influences. Some do this by attempting to tread grounds so extreme that others simply haven't dared them. Others fuse styles beyond the norm. And a third category simply take a bunch of their favorite metal genres and soak them together in an acid bath.

Flaming Tusk is a young New York band that fall into this last group, but they do it fairly well, fusing together sludge, thrash and classic doom metal influences into a tireless riff-o-rama dowsed in the gasoline of grunts blunt enough, and snarls cutting enough to sate most entities and extremities. The entire band use strange stage names like vocalist Stolas Trephinator, drummer Dumnorix Xristophage and bassist Scheidaar. I don't get it, and you don't need to. They've here written a pretty tight debut showcasing their potential, which rests heavily on the killer riffing of Don Blood and 'Zosimus'. Seriously, these gentlemen can groove, and though many of their riffs recall the primal, morbid ascensions and declensions of an old Slayer, or the more creative sludge of The Ocean, Cult of Luna or the later Isis records, I'd say on the whole what they evoke is quite an original trip, worth taking even if the vocals require a little adjusting (unless you're already into extreme sludge like Soilent Green or Eyehategod).

Flaming Tusk is capable of both morose, spatial composition and a more savage veneer. Tracks like the melancholic, droning "Icy River" or the flowing, post-hardcore of "My Red Sun" exhibit the band's slower, tumbleweed mode, ridden with bombastic bass pomp and effective, drudge riffs that feel like an endless day of toil as some backwoods swamp logger. The band can also kick up a dusty haze of glory as through the melodic winding of "Anathema", or the dark, lurching rock of "Instability". But I found myself drooling most over the heavier, crashing thrash and burn of "Cillaightfearn" or the crushing, abysmal-tongued power groove of "No Smiles", which plays out like an armada of hellbilly circus freaks as they burn the goddamn Earth to ashes, 'Stolas Trephinator' going overboard at 2:30 with an insidious spoken word fill that had me both laughing fiendishly at the absurdity and clawing my own eyes out in terror. "I Nap in Blood" is another harrowing tune with its bright, leering dis-chords and surges of dire speed.

The band will probably be pigeonholed most into the sludge category, but I feel like they could hold an appeal to fans of bands as wide as Mastodon, Rosetta, Baroness, Isis and the obscure Kinghorse, though the vocals here resemble only the heavier on that roster, and in fact, feel far more organic and extreme within this band. I'll admit, Trephinator took a little getting used to, despite a long history listening to and enjoying a great many rasped and guttural front men, but in time I grew to accept them alongside the mesmerizing riff patterns, and it seems this would be pure horror in a live setting. At any rate, the band is offering this album with a 'pay as you will' option, so there's no excuse not to check out a few samples. If you're seeking a relatively fresh alternative to any of the bands I listed above, they may just have your ticket.