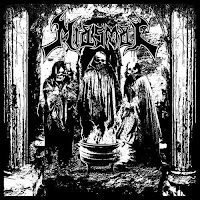 I've probably brought up the phrase 'old school' in my reviews more times than is healthy for my own sanity, but these past few years have been such an explosion of re-worked ideas and tributes being paid to artists of the 80s and 90s that I see no end in sight. So maybe I'll take my own advice here, and now proclaim this excursion along the paths of the past the 'Not New'. Miasmal is a newer Swedish band who dabble in the Not New, of the death metal variety. You can hear the influence of a band like Entombed or Dismember in the songs, but rather than a mere rehash of those bands' ideas, there is a slug of punk hustle and vibrant flavor swishing around in the creative cores of their brains that forces them to 'draw from' rather than just re-organize a few chords and copy the masters.

The Miasmal EP is brief, with but two songs and a limited 7" pressing, but both are new, with no relation to the band's s/t demo of 2008. If you can get your hands on this, it will be well worth the time, because I have a feeling we're hearing a band here who could carry the traditional Swedish death-torch aloft without walking in the precise same footsteps of its previous bearers. "Creation of Fire" is a real crowd pummeling, a death 'n roll number which should appeal to both the d-beat crazed crowd that idolizes a band like Rotten Sound, Nasum, Skitsystem or Trap Them, and the more cryptic fiends that venerate the lyrical content and visual aesthetics of the early 90s Swedish death metal flock. Good leads bite through the rocking rhythms, and guitarist/vocalist Pontus has a vocal style of the L-G Petrov variety. "Bionic Godhead Erase" is both more abrupt and doom-laden, as it shifts through huge, demented grooves and a faster furry of spurious deathblows, grinding through a series of simple but effective riffs that will have the listener back for seconds once the track ends.

As we are dealing in the Not New, Miasmal is not a band I could quite call original. But they're far less faceless and generic than the swaths of other bands attempting to reinvigorate this early aesthetic upon the hordes of younglings to whom we pass the torch. Kind of like the excellent band Tribulation, you can hear all the clear influences, but they mix it all just enough that you feel they've got a vulture's grip on this old carrion, chewing the carcass that its own existence is made stronger, its circle of flight wider. All you old school...er Not New nutters should give them a listen, and one of the two songs is up on their MySpace.