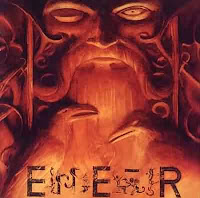 Einherjer has never been the most complex of Viking metal advocates, preferring instead to write base melodies with mead swigging, mug slamming rhythms that can immediate cause every white male of North European descent between the age of 18-60 to beat his chest in tribute to his distant ancestors. Regardless, they were responsible for Dragons of the North, a pretty thundering effort, far more accessible than something like the vengeful album Frost by Enslaved, or Helheim's raging Jormundgand. For whatever reason, though, the band decided to make some changes for the following album, due out through Century Media, and brought on a cleaner singer named Ragnar Viske.

This was their big break, and well, I feel like they very much dropped the ball. First, the title of the album, Odin Owns Ye All, is kind of catchy, if a little silly, especially when you are staring at that obvious cover art carving of old One-Eye, Hugin and Munin. This leads one to believe that the band were aiming for some theoretical My First Viking Metal Album™ crowd. Indeed, it sounds as if the album were written to lull the babes of LARP gamers and SCA advocates in their cribs, while mommy and daddy played Arwen and Legolas, flinging packets of sand at one another or engaging in lewd acts while dressed in anthropomorphic animal costumes. The album is simply too festive...it sound likes a bunch of eunuch clowns dancing around in tights, serving fruits and honey to some flamboyant jarl, while slapping each other firmly on the rump.

Here is the formula underlying the majority of the material here: mid paced, plodding guitars chug along while saturated in flighty keyboard lines, with Viske trying his best to add traditional, manly vocals with just a bit of an edge. There are very few interesting riffs on this album, and even at its best, which I'll call "Remember Tokk", or the depths of "The Pathfinder & the Prophetess", you get a few throwaway melodies, a subtle grace to the standard palm mute triplets, and some acceptable backing shouts. I'd almost call this Gothic Viking metal, if that makes any sense, and unfortunately, it really doesn't work, to the point where the listening experience feels pretty awkward. Even on a bad day, with a sever hangover, a band like Thyrfing or Finntroll makes this feel like fluff by comparison, and though the ultimate goal of Odin Owns Ye All was to create a festive, cheery atmosphere that followed a particular set of traditions, I wouldn't even use this as background music when my chaotic dumpy level 63 dwarf berserker is hanging by the local tavern.

Perhaps the one thing here that did not eventually grate upon me were the lyrics, which seem to directly speak through the spirit of the Eddas, with a straight narrative dowsed in the native poetry of those tales. Unfortunately, the halls are alive with such gaiety here that it becomes impossible to place the fear of the gods, the doom of Ragnarok and the scars of cold and bloodshed into the thoughts of the listener. I realize these ancients times in question weren't completely resigned to a grim doom each waking moment, but that's the way I like to dream of them, and by the great cudgel of the Gods, that is what I will listen to when dreaming!