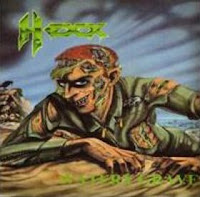 Continuing the band's evolution, the Watery Graves EP would arrive a few years post-Quest for Sanity, serving as a teaser to their 3rd full-length, Morbid Reality, which would see release through Century Media records in the following year. The difference you'll notice here is that Clint Bower has taken his vocals even further into the reach of extremity, here bordering on death metal and completing the Hexx career transformation from power/speed roots to a communion of death and thrash metal. But this is a shorter EP than its predecessor, with only 3 tracks, 2 of which are remakes of songs from the Under the Spell album, converted into a hostile thrashing force that would suffice alongside the band's newer material.

You'll notice immediately that "Watery Graves" itself is a superior assault than anything on the Quest for Sanity EP, so the band's songwriting ability has caught up here with there. It's a cruel sounding piece, tightly wound with the frenetic leads the band had already mastered, in addition to a slew of fairy complex, aggressive riffs that ensnare the listener quite the chaos of a sinking wreck, as survivors desperately cling to flotilla, fighting against one another for their last breaths in this world. The remake of "Edge of Death" is much more forceful than the original, and I rather like Bower's vocal performance, though I wouldn't call it a worthy replacement for its namesake. The guitars shred with abandon, and the riffing pattern is a good fit for the speed injection. It's also cool that the band would include this, as if to say that they haven't entirely turned their backs on the past. "Under the Spell" also works well enough, seeming like a cover of the original by a band like Sadus or Exodus. The morbid melody of the bridge remains intact, and again, a good idea from the Hexx team.

Overall, the music here is better than Quest for Sanity, but there is only a single new original song, which is also available on the Morbid Reality full-length (and sounds better there). So there is not a lot of intrinsic value here. Had the two Under the Spell tracks been included with the following album as bonus material, then there would be no reason at all to acknowledge this release, but as they're not (at least on my copy), it might be worth a glance if you're A) a massive fan of Hexx in their later, thrash/death years or B) an obsessive completist. Either way, they are not better than the originals, so they serve as little more than a curiosity.