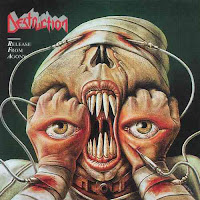 I've always held Destruction's album Release from Agony as a clunky elder sibling to the masterful Malleus Maleficarum by Pestilence. Both were produced by Kalle Trappe, and both have this extremely surgical sound to them which makes them stand out in a unique strata, even among the increasing wave of technical thrash present in the later 80s. In fact, this record is so ambitious and unapproachable to the average thrash fan that it probably did more harm than good to the band, less concerned with breakout hits like a "Mad Butcher" or "Curse the Gods" and more about the level of clinical extremity to which the band could impinge themselves.

They weren't alone in this, as the 1987 releases from Kreator (Terrible Certainty) and Sodom (Persecution Mania), the other thirds of the Big Three also exhibited an increase in the respective bands' artistic proficiency and prowess, and outfits like Mekong Delta were also arriving around the time. But Destruction evoked something here that is quite unique and difficult to penetrate, with walls of precision thrash punch riffing played at high speeds, and dominant, classical shredding that most thrash bands shied away from. They were no strangers to musical talent, as was obvious from the wealth of notation vomited forth on Eternal Devastation or the Mad Butcher EP, but here it is at its most blocky and unchecked, to the point at which it hasn't even been reproduced by this very band since. Cracked Brain would come close, but that album feels like a more accessible substitution, lacking Schmier's vocals (though André Grieder was a close approximation).

Release from Agony is a punishing presence, and a harrowing trip through a malpractice ward, late at night, beneath some city building, where no passersby can hear the victims' cries. Schizoid, frenzied rhythms writhe along before the savage, unforgettable sneering of the front man, your tour guide through this Teutonic lobotomy. The cover art is striking not only for its surreal, human exaggeration, but because that is EXACTLY what you will turn into after you've heard the music. The epic intro piece "Beyond Eternity" visits the threshold of neo-classical shredding over a brooding but wondrous ambiance, all to soon parting for the spiral descent into madness that is the album's title track, ripe with thundering, mute-heavy six string violence, and swift bursts of melodic delusion, climaxing in the obvious but firm chorus. "Dissatisfied Existence" is one of the more striking tracks on the record, with subliminal, cycling riff patterns that collide into another and then spike into your cranium. The leads beyond 2:30 are as demented as they are traditional, and you'll find your attentions bouncing between them as your mind splits vertically into its separate halves.

Is it worth to be alive?
If I ever want to attract attention, it won't be for your affection
I don't know what I really want in my life and I don't remember whom I once believed

"Sign of Fear" is the closest the album has to an 'epic', nearing 7 minutes in length, and slowly transgressing itself with a swell of muddied synthesizer or a flighty acoustic passage, to culminate in a grooving madness around 4:00 that is as sure to drive the last shreds of sanity from you, with its precise, winding streams of muted hostility and Schmier's near whispered ministrations, which I'm sorry to say, will NOT mend the wounds. The song is sick, and should be made illegal! Other striking numbers here include "Unconscious Ruins", which is a desperate rager, yet startlingly morose, coming very close to a classical orchestration made pure thrash. "Our Impression" is competent, does not stand out to me, where "Incriminated" is another example of the band's crashing lapse into madness, with turbulent dynamics and repulsive momentum. The closer, "Survive to Die" is nearly a manic and choppy as "Incriminated", though the way the band explodes into a micro-cover of the swing classic "In the Mood" almost through me out of the beams of the album's paralyzing stare. Like waking up from a nightmare. In fact, if you don't immediately replay the album, that is likely what has just occurred.

I mentioned a comparison to Malleus Maleficarum earlier because it is apt, and I do feel like this album is sort of a 'proving ground' for that one, a testing of the Kalle Trappe waters, though the two bands are not alike vocally and separated by an obvious national border. The Pestilence effort is far superior in most ways, with unbelievably catchy songs, but Release from Agony does function on a more dense and disturbing level. It requires a little more patience and comprehension than the Germans' earlier output like the crude Sentence of Death or Eternal Overkill, so it may not have that much appeal if you're just out for some shit kicking street thrash. This album is also a little under-produced. I feel like the tones get garbled and disjointed, as in a cerebral vortex, and it's not the best sounding of their pre-reunion catalog. Once in awhile, the bassist becomes lost beneath the twisting double helix of Harry and Mike, but not so for his vocals. Those gripes aside, its a mesmerizing and often haunting album, more technically inclined than the fare the band was usually known for, and certainly belongs mentioned in the same breath as other European headfucks like Deception Ignored, Punishment for Decadence, or The Music of Erich Zann.