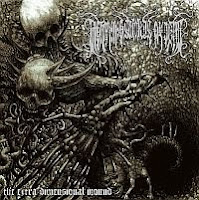 The first thing one will notice about The Extra Dimension Wound is the massive stride in production the band has taken since their debut The Golden Plague in 2007. While that was a raw and appreciable debut effort with some decent songs, I was simply not prepared for the huge tones here on the follow-up. The bass here is enormous, and the guitars brazen enough to rend open the very flesh of the Earth, to spew forth otherworldly abominations. The Lightning Swords of Death are a pretty intelligent band. They have a cool name. They use consistently good cover art. They have phenomenal song titles like "Damnation Pentastrike", "Vorticating into Scars" and "Venter of the Black Beast".

It comes as a contrast then that the band play such a brute, simplistic brand of punishing black metal. Clearly the major influence here is Bathory, and the band culls their pacing almost directly from the first four albums, in particular The Return and Under the Sign of the Black Mark. But there is also something more broadly 'Swedish' about the LA band's writing. The spacious, creepy tones they emit are resonant of the more energetic exertions of orthodox black metal bands from that nation like Ondskapt, Valkyrja, Dark Funeral, Diabolocium, and others. Lightning Swords do not try to impress with a huge slew of riffing...in fact, this is almost the stuff of the primal, fundamental elements arisen from chaos. Barbaric, prototypical death metal rhythms thrust about the interminable, downward spiraling galaxy at both fast and slower range of execution, while Autarch's throat gorges on the hopeless truths of a carnivorous cosmos, as it feeds on the flesh of all living forces.

I'm going to be blunt, though. This is an album one should listen to SOLELY for its oppressive atmosphere, because there is not a single case of a guitar riff on this entire album which I felt was written well enough that I'd want to listen to it again. The riffs feel as if they are meant to be predictable and effective, and a result, not so interesting. These are not new ideas here, but the channeling of familiar force into the skull. Thus, the blunt instrumentation of "Damnation to Pentastrike" and "Nihilistic Stench" rely upon their sum wall of force attitude as a quality rather than the individual components, which do not stand out far at all (though it would be hard to argue that this drummer is not a beast). In fact, the most musical moments on all the album are the 2:00 "Zwartgallig", which is but an ambient interlude...and the closing moments of the epic length "Paths to Chaos", in which there are some finely tuned leads, and I love that doomed bass.

The Extra Dimensional Wound has me on the fence, because unless I'm really in the mood for something mindless with a punishing tone, I have very little reason to revisit it. As a loyal and contemporary tribunal to a band like Bathory or Mayhem it's functional, loud, and oppressive, but then...it also lacks the genuine filth and the memorable songwriting those bands were able to produce 20 years ago. There exists comparable if not better black metal writing now from hundreds if not thousands of bands internationally in these days, and I just wasn't taken in with anything beyond the band's nihilistic grasp, superb tone and lurid packaging.