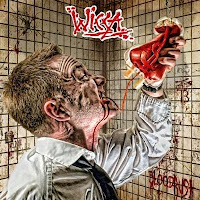 Reducing the small pool of 80s thrash metal bands left to unite by one more, the rather obscure Wicca have returned after 21 years to release the followup to their debut. Splended Deed was a brash but serviceable effort, targeted primarily towards the audience of more successful German acts like Sodom, Destruction, Tankard, Kreator and Exumer. But while competent and energetic, it was a little less than memorable, and fell by the wayside like so many other hopefuls during the overbloated signing spree near the end of that decade. What's most impressive about the band, is that they have managed to recall all of the original lineup for this new album, so the listener is getting what is essentially a direct sequel, without any real shift in tone or outside influence.

What a sequel it is! Bloodrush is a fun, entertaining blast of thrash metal, with a standard 80s riffing collision between the East (Germany) and West (Bay Area). There's probably not a lick on this entire record which hasn't been performed before, or at close approximation, yet Wicca know how to capture both their youths and the lifesblood that once gave the movement such a frenetic attraction to the metal fan tired of his traditional metal or punk. This is one midlife crisis worth banging your head to, and not a single track here exempts itself from the band's bright, mindless fury. But while the musicians have all proven themselves yet again with a flurry of fist thrusting, neck snapping ministrations, the real gem of the band is vocalist Olymp (earlier known as Pädde, same guy), who evokes an angry and savage accent to his vocals that make him stand out slightly from the hordes of Mille, Angelripper or Schmeier-a-likes. This is the real deal, it's just a little too late...

But not too late to break a few limbs on the way out, as tracks like "Generations Talk" and "Sadsong" opt to beat you senseless, with a charging, voracious propulsion that should have every poseur in the room trampled in short order. The band doesn't exactly move at an unmatched speed, instead they focus on a pace in which every palm mute can be clearly heard like an air raid at dawn, Olymp's vocal battery joined by gang shouts and perfectly pitched echoes and effects that add a charisma so many of today's 'retro' thrash bands fall entirely flat on. Yeah, he's a better vocalist than pretty much any thrash band with an average age of 25 or less these days, creating even less of a compulsion to listen to any of them when the old timers are still managing just fine. Other fun (if familiar sounding) tracks here include the Vio-lence like "Disneyland" or "Tongue of Confusion, and the slower Slayer-meets-Anthrax crawl of "Mega City", but nothing slacks too far behind. There are a pair of tracks re-recorded here from the debut: "Pull Down the Wall" and "Psychic Warfare", and both sound well in line with the newer material.

Another area in which Wicca have come a long way is the production. This has to be one of the cleanest, most professional sounding thrash albums I've heard of late, and yet it sacrifices nothing in the way of its aggression. Granted, that's 21 years of technological progress in the field of recording music, but it loses nothing in the lack of chaotic atmosphere that painted Splended Deed and so many of its 80s peers. This should go a long way towards forging a connection to new thrash fans. Wicca do not completely excel in the songwriting department, and I'm not sure the excellent vocals entirely compensate for the lack of innovation in the arrangement of the riffs, but it's unlikely that they set out to do anything more than trump themselves with a good old fashioned headbanger. Few people paid attention to their last effort, so Bloodrush will either sink or swim based on the number of younger fans interested in the wealth of reunion material coming out, or the few deeply obsessed old guard that remember the name.