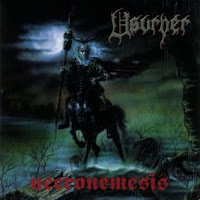 Necronemesis, the third full length effort from Chicago's blackest (and I don't mean skin tone) band Usurper, would mark a moderate departure from the sound of their previous work. Where before we had a crushing example of post-Hellhammer, we now have a ball fisted, bludgeoning thrash force which more closely resembles some bastard spawn of Rigor Mortis and early Hallows Eve, with the band's fondness for witchcraft, monsters and dark folklore now in full bloom. You can still hear the Celtic Frost whenever General Diabolical Slaughter belches out a 'Hey!', and perhaps in some of the riffing, but this record pays heed to a far wider scope of thrash, death and black metal influences.

To be honest, I thought it was a step back from Skeletal Season, albeit a small one. The band still had the chops to conjure up their morbid walls of atmospheric, thrashing doom, but the utterly crushing tones of a Diabolosis or Threshold of the Usurper are missing here, replaced by some rather average thrash riffs. Granted, they were never exactly virtuosos, and in fact Necronemesis does have some faster fare here than normal like "Full Metal Maelstrom" or "Slaughterstorm", though the latter reminds me in spots of "Necrocult Part 1" from their 1997 EP. The leads here are far more furious, but the overall tone of the album felt a little dry to me, rather than the ominous killing sprees the band had previously committed.

There are several diamonds in the rough, with a dull shine, one of which would be the morose title track, a slowly building, chugging atmospheric thrash exercise with guest vocals courtesy of none other than the great King Diamond himself. Usurper had covered "Charon", and Mercyful Fate's "Black Funeral" on previous releases, so this was undoubtedly a huge moment for the band, to be graced with their lord and savior. "Warriors of Iron and Rust" is suitably warlike and violent, though the lyrics about metal, leather and alcohol were already feeling a little corny as early as 2000. Thankfully, they are an exception here, as most of the bands lyrics still deal in themes of horror and other cult obscurity. "Full Metal Maelstrom" is a head on blitz featuring guest vocals from Proscriptor of Absu, and "Into the Oblong Box" is a slowly bouncing track that feels like it would have been right at home on Hallow's Eve's Tales of Terror.

A decade later, I admit I've never really had the urge to reach for this on the shelf when better options were available, as in the rest of the band's catalog. Something about Necronemesis screams average, though the band might have great taste in guest vocalists and song titles. At the same time, there is really nothing offensive about it. The riffs just fall a little flat, and the atmosphere not nearly oppressive enough to compensate. I suppose if you were adamant about collecting all of the band's works, you might not find this too far a stretch from Skeletal Season, but in my opinion its a rather dull impression on the skull.