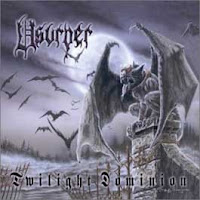 I can always appreciate a band for trying to branch out, but in the case of Usurper's third album Necronemesis, that branching out involved a rather mediocre watering down of the band's heavier than though, raging Hellhammer roots, an offering of dessicated thrash that neither excited nor compelled through anything bordering on the monstrous evil conveyed by many black/thrash acts. A few years later, with a new drummer in tow, the band would return to the studio to produce their fourth full-length, Twilight Dominion, and through a new label...none other than Earache records. This is not a far cry from Necronemesis in terms of style, and some ways, it still suffers from that records blase riff writing.

I'll even go further, and admit that General Diabolical Slaughter's vocals here are rather boring, even in comparison to the previous album. He still gives a good grunt here or there, and in truth he spins around and heads back towards a tone more reminiscent of his older, Tom G. Warrior vocals, but a lot of the lines here feel monotonous and simply too clean. They had me craving the old Diabolical Slaughter, who sounded like a parting of graveyard soil to vomit out the dead that they might torment the living. Here he sounds like any old random, 2nd or 3rd rate thrash singer with a pretty manly, angry voice that sounds a little weaker than the music surrounding it. The riffs also suffer a little, but Twilight Dominion benefits from something Necronemesis did not have: a thicker tone which naturally adds a slight layer of atmosphere.

This album most reminds me of the great US band Deceased, in particular their album Fearless Undead Machines. The music is nowhere near as good, but the blend of classic, dark and melodic speed metal riffs and leads within the denser compost of black, death and thrash metal really casts a similar shadow, and the vocals are also similar to King Fowley. When the communion of riffing fury and vocal abandon works, it works well. "Golem" shows a strong side to the band, with engaging walls of death metal riffing, thundering, precision drums and a massive collapse into thick doom for the finale. "Utopian Nightmare" also builds a great, Celtic Frost and Cathedral inspired groove infused with some solid chugging and Necromancer's strong bass presence (which is true of the entire album). The leads in "She-Devil" are nice and wild, "Lycanthropic" and "I Am Usurper" get a pass, and "Invincible Overlords" might suffice if you seek something more scathing. The lyrics are almost all based around pulpy horror and science fiction themes, which have a lot of appeal to me.

One of the worst songs here is, of course, "Metal Lust". For some strange reason, the band has yet again decided to include another 'metal way of life' track (I refer you to "Warriors of Iron and Rust" on the last album), which feels pretty meek in the face of the cooler topics they explore in other songs. Hell, the latter half of the album's tracks revolve around the 'Chronovisor' myth! Now that's fucking cool! Clearly Usurper were a respectable metal band to anyone with ears. So "Metal Lust" sounds phony, and phoned in, especially when Slaughter intones 'nothing else to live for, a Metal way of life, nothing else to live for, so I will make you die!'. For the thousandth time, a song like this is complete unnecessary. Maybe to an extra terrestrial visiting Earth in 1985, it was a helpful piece of advice when a band proudly announced their "Metal _ _ _ _" in a song title. But by 2003, we all fucking understand. We know you are a metal band. We're your fans. We listen to you because we like metal music. It's a foregone conclusion. I'd expect this sort of output from a clown band like Dream Evil, and I realize it's just meant in good fun, but do we really need this sort of predictable, self-referential material from a generally good band like this one?

It's frustrating, but what can you do. Twilight Dominion is a better album than Necronemesis, but the band would have a long way to go before they reach the bar they set from 1995-1999. Half the songs here are worthwhile, the other half not so much. This doesn't always work as a thrash metal record, as the rhythms are too familiar and fundamental, but the leads are pretty exciting throughout, and if you're seeking out a more brute companion to Deceased's Fearless Undead Machines or Supernatural Addiction, you may have found one. The mix sounds good and thick, in particular the bass and guitars, but the vocals feel like a man going through the motions, too easily dismissed, except when he bursts into life like the vicious, black metal screaming in "She-Devil". Coincidentally, this would be General Diabolic Slaughter's last record with the band, with Dan Tyrantor taking over for the final slay-ride, Cryptobeast.