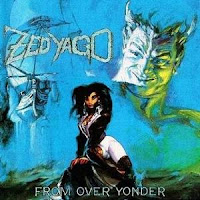 1987 was the year Helloween broke out in a major way with Michael Kiske and their sophomore album Keeper of the Seven Keys Part 1, but they were not the only German band engaged in flights of fantasy lyrics and impressive, accessible melodic hooks that year. Nor was Running Wild the sole German band to explore 'pirate metal' territory through their excellent Under Jolly Roger in 1987. No, it was also the debut of Zed Yago, the new band to feature the vocals of songstress Jutta Weinhold, who had previously performed in prog rock, blues and even some controversial punk metal. Weinhold joins the 'classic' lineup here of Tatch, Gunnar, Bubi, and Jimmy Durand, and together they would produce a pretty stellar first effort.

That's not to say this is their best, because aside from 3-4 of its better songs, From Over Yonder does not hold up quite so preciously as its follow-up Pilgrimage. Still, the style was pretty original for its day...a female fronted fantasy metal band with both the ballsy, traditional NWOBHM chops and what might have been the better production job of their two albums. This is crunchy and clear metal with some great hooks to it, and resonant, scintillating leads that breeze gracefully across the prow as it crests each rolling, rhythmic wave. The appeal is widespread, as I could envision a fan of anything from Helloween, Warlock, W.A.S.P. or Accept to the Scorpions, Bonfire, Dokken and Saxon appreciating what's offered here.

I'll begin this with the creme of the crop, the opening track "The Spell from Over Yonder", which builds a slow, desperate mystique, its primary riff playing out like a melodic metalized alternative to the James Bond theme before the giant, blues balls of the verse riff break forth, and Jutta gives you what was probably your first taste of the best German female front lady of the 80s (at least in traditional metal). I love the way her voice interacts with the chorus riff...such a primal and elegant force, compounded by the subtle surge of the guitars. "Zed Yago" is another of the band's best tracks, with a resounding, simple guitar lick that channels a unique, polished savagery over which a tasteful melodic fill dances like a slave girl at a pirate bazaar. "Rockin' for the Nation" is another showstopper here, reminding me a lot of Saxon, but with firm use of the keyboard player Hansi Kecker, and a lot more depth and appeal than the rather obvious lyrics might suggest. After this trio, I favor "Stay the Course", which feels like a midpoint between AC/DC and Iron Maiden's "Run to the Hills".

The rest of this material does not hold up quite so well for me, but it's solid enough that it doesn't drag down the album if you plan on listening straight through. "The Flying Dutchman" is a bombastic, operatic interlude piece using horns, synthesizers and guitars to introduce the narrative of the band's mythos. "Queen and Priest" had some scorching, slow hard rock rhythms akin t o"Rockin' the Nation", but it isn't as catchy. "Revenge" is a pretty, sparingly climaxing power ballad, but not as powerful as "The Pale Man" from Pilgrimage. "United Pirate Kingdom" is Zed Yago doing what Zed Yago does best, slowly pumping heavy metal with eagle-like soaring vocals, and the addition of cheesy but adequate keyboard 'horn section' presence, but it's not that memorable either. "Rebel Ladies" might have made an impression on Lenny Wolf, because Kingdom Come's "Can't Deny" from the 1991 album Hands of Time sounds very similar to me, at least the big lead-in riff.

All told, From Over Yonder is a solid listening experience, especially if you take into consideration the scarcity of quality traditional metal with female vocals in the mid 80s. It certainly beats out anything Lita Ford would produce in her solo career, and it's the equal to any of Warlock's four albums, but I prefer cutting out the less important songs and playing the rest in a mix with all of the sophomore album Pilgrimage, which is astoundingly good. In fact, on some versions of the Pilgrimage cassette release, a few of the From Over Yonder tracks were included! The album still sounds pretty clear today, and though I don't worship all of its wiles as much as its younger sibling, it remains one of the better efforts in Jutta Weinhold's career, alongside Pilgrimage and the mistreated Breslau record.