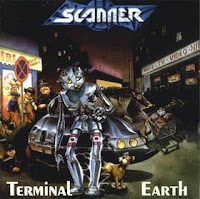 Scanner's first album Hypertrace was a blazing, screaming ball of melodic metal energy thrust like a comet across the starscape. A conceptual effort with glorious, songwriting and an unstoppable, virile energy despite its obvious eccentricity, it set up fairly huge expectations. Finally, another band with the raw speed and fire of their countrymen Rage! The direct followup to Hypertrace, Terminal Earth would be the one album for the remainder of the band's career that truly honored those expectations, a slab of peculiar, playful metal with some goofy but endearing lyrics, screaming high pitched vocals and brilliant hooks that would sink into the skin nearly as much as the debut.

However, Terminal Earth also marks the birth of the debilitating factor that would cripple this band's rise to success, that of the almost incessant line-up changes. There was but one change-up for this particular album, the replacement of Michael Knoblich with screecher S.L. Coe, and to be honest, Coe is a perfect fit for the band, with a shrill, almost impossibly high pitched tenure akin to Kai Hansen (Helloween, Gamma Ray) that has carved out much of his career, in both Scanner and the other acts he has worked with (Reactor and his very own C.O.E. project). Elsewhere, Terminal Earth is quite a close successor to Hypertrace, with the exception that many of the songs focus on individual subjects in place of a storyline, and the production and songwriting are ever so slightly given tighter reins. The lyrics aren't as far-fetched as the prior album, and yet in its impetus to humor us with cautionary tales of modern life and materialism, it remains all the more corny.

But when the music is this good, a little disconnect to the lyrics is more than bearable, and with "The Law", Axel Julius and Tom Sopha come out firing with quality, melodic speed metal rhythms that take the torch from their NWOBHM influences and the faster, more aggressive leanings of Running Wild and Rage, a few of the band's co-conspirators in the great German dominance of this style. Coe explores his range here, with a steady mid-range that can at any moment fly off its hinges toward the firmament, like a bloody cosmonaut on eagle wings. Yes, Scanner's new vocal fixture should satisfy the dwelling fans of Knoblich, and he's honestly got a better range, though the highs are perhaps not quite so satisfying as on Hypertrace. "Not Alone" is a rather enthusiastic 'statement of fact' about the existence of extraterrestrials, delivered through some snappy, charging riffs and swell leads. "Wonder" is the first of two infectious, I daresay 'pretty' songs on the album, with a superb chorus in which the guitars provide a tasty coattail to Coe's melodic spurts. I also really loved the chords in the verse, such a grace and glory that recalls some of the better, slower Running Wild songs of this period.

The next two tracks bring about the not so scathing critiques of our consumer society, but they do it with class. "Buy Or Die" delivers a high speed chase of carefully wound melodies, a taut momentum that carries into the backing shouts of the chorus, Coe screeching across the surface like a barn owl awoken by a farmer's shotgun blast. Indeed: No matter how you pay/cash or credit! "Telemania" is the fairly typical 80s metal rally against the intoxicating effects of the old boob tube', with a morose, creepy verse that picks up into some Maiden/Priest rocking while Coe belts out such warnings as: 20 channels by remote control, choice enough without a move. Holy fuck, Batman, we actually had 20 channels in those days! I doubt I've got half as many by 2010. Anachronisms and irony aside, the song's pretty good, with a few choice riffs, including the resonant crash of drums in the bridge. These are followed by "Touch the Light", a song even more flighty and transfixing with its 'pretty' bits than "Wonder", due to a tremendous chorus hook and some of the best sheer melodic guitar on the album. The Priest-like verse guitars kick a lot of ass, and when it picks up a little speed before the 2nd verse and inevitable chorus, I am reminded highly of moments from the first album.

"Terminal Earth" itself is also no slouch, with some bad ass, classic speed riffing and an obvious chorus that stands out in the memory. Sadly, the 9+ minute epic "From the Dust of Ages" might show the band biting off a little more than they can chew. There are a number of good riffs found within its depths, in particular the unkempt groove and powerful piston-like riff that occur deep into the first verse, or the doom-like marching slog (almost like a metalized adaptation Gustav Holst's "Mars", from The Planets) transpiring after 5:00, but I did not feel enthralled through much of the track. Compared to this, "The Challenge" is fast and flighty, returning to the formula of the rest of the album, with surges of majestic speed and well-composed riffs that breathe across the decades, losing none of their momentum. "L.A.D.Y." is a bizarre but funny track about a guy going to a gay-club under the recommendation of a friend, possibly trying to curb some deep seated homophobia, instead falling in love for the 'lady' he meets, who I'm assuming is either a transvestite or not a 'lady' at all. Musically, it's got more of a hard rock feel to it, clearly the least serious piece on the album, but nonetheless fun.

Though the frothing intergalactic steed that was Hypertrace might have been gelded down several inches to produce Terminal Earth, it still retains most of the key qualities that heralded that album's success: power, melody, proficiency, and grace. This is one of 'those German albums', like a Keeper of the Seven Keys Pt. II, which has a sense of humor almost alien to kids of today, a band not taking itself all too seriously but regardless exhibiting a high level of skill. S.L. Coe was again a good fit for the band, and each of the other musicians had developed a more mature set of chops, important since these were standalone tracks rather than sci-fi narrative pieces of a whole. This album was further proof of the inherent talents of Axel Julius and his band of speed metal space cadets, talent that would unfortunately be squandered as the well of inspiration would dry. The band would go on to produce a very lackluster third effort, with only one member remaining from this period (guess who), and all momentum lost as the 90s become a time of turning one's back on traditional, power and speed metal. But Hypertrace and Terminal Earth provide a rather timeless legacy of under appreciated German classics that deserve their berth alongside the finer works of Helloween, Gamma Ray, Running Wild, and Rage.

Verdict: Epic Win [9/10] (blankets and pillows and pills for the brain)