Weinhold - From Heaven Through the World to Hell (2004) 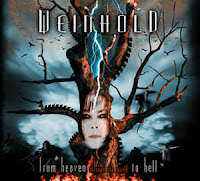 As Zed Yago was quickly to dissolve after a pair of albums, so too was Velvet Viper, bringing an end to the entire 'Zed Yago' concept. Following The 4th Quest for Fantasy, she released one solo album called To be or not... in 1993 which remained within the realm of hard rock/metal music, and then took a long hiatus from the form, instead moving on to blues and other styles. A decade later, her interest returned, and so she assembled a new band with various friends she had on the music scene, and later some members of the band Shokk Machine, including Markus Großkopf of Helloween.

Weinhold is a pretty natural extension of Jutta's work in Zed Yago and Velvet Viper, with all the added 'perks' of the modern studio era. There is a more progressive and atmospheric edge to this debut than her previous albums. The core is slightly more of a chug fest with simple power thrash metal riffs, above which the keyboards and effects simmer. Though many younger fans who got into metal in recent years might actually find this heavy level of studio polish a boon, I actually believe the album trades away some of the charm of its predecessors, and does not necessarily reap a reward. Jutta layers her vocals here a lot more than the past, and though her performance is still solid, the songs were not as striking as those found on a Pilgrimage. She has always maintained an interest in transforming literature into music, and From Heaven Through the World to Hell does continue that tradition, with tracks that delve into Shakespeare and other influences.

It's also far more expansive than I'm used to from this singer. For example, take the track "Macbeth", in which she creates all manner of vocals to represent characters in the tragedy along side a bluesy big rocking beat. Once she soars off into her chorus and verse lines, all is well, but clearly this new band is not as intent on straightforward metal charms as her old one. There is an interesting combination of styles to be had, like the mix of groove and progressive metal on "My Own Sister", in which Jutta herself shines, or the straight blues rocking of "Wounded Pioneer" which reminds of Def Leppard and AC/DC. "Heaven" is a sweeping rocker in the vein of a "Dream On" via Aerosmith, and "Rock of Metal" is almost entirely classic Zed Yago, and "Nearly a Lovesong" also delivers a direct connection.

A decade is a long time, but Jutta Weinhold did prove with this new project that she still has the range and passion to explore this end of the musical spectrum. That said, I feel this modern material lacks some of the subtleties of the Zed Yago era, and where those olden times would produce everlasting choruses, grace and power, these seem a little too tidy for fulfillment. From Heaven Through the World to Hell is not a bad record, as she is able to match her vocals to almost any musical backdrop, but the riffs here are pretty lackluster, and her voice is really the one part of it I would come back to hear. Sometimes, that's just not enough.