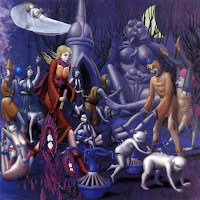 ...and there it stood. An inch thick in dust, just to the left on my CD shelf, in the 'no fly zone' where I generally put albums that are best left forgiven and forgotten. A copy of Cathedral's 1991 debut, Forest of Equilibrium, which has been listened to approximately five or six times in memory, yet I've still failed to penetrate it's harrowing depths with anything more than an obligatory curiosity. The cover art, like most of their other releases, truly grandiose in its morbid psychedelia. The contents...well, let's say I'm feeling a streak of masochism today, so I will once again dare its secrets, to overcome the stagnant neutrality I so lavish upon it.

First, let me qualify that I am not some hater of Cathedral, and in fact I very much enjoy their more upbeat recordings like The Ethereal Mirror or The Carnival Bizarre. There's something to the charm of Lee Dorrian's odd voice, the tuning and tone of Gaz Jenning's guitar, and the fantastickal trips they offer to guide you through by the hand. Cathedral seems like the mad experiment of some deranged Dungeon Master, pumping psychotropic pheromones out through his pores that create a haze of reality blurring dementia. To that extent ,this Forest of Equilibrium, in all of its sodden non-glory, does match up well with the remainder of the band's catalog. But half the tracks are so damned lethargic on this release that they fail utterly to grasp the matter of my memory.

Yes, a laconic pacing is to be expected from this or almost any other release in the doom category, and Cathedral attempt to compensate with Dorrian's most eerie vocal performance. Tracks like "Serpent Eve" really benefits from his endless well of character, and he's a more than adequate narrator for the bad trip this music coughs up. Subtle touches of choir, melodic twining guitars and a staggering, if tortured momentum assist the listener in surviving the experience. "Soul Sacrifice", in which Dorrian channels multiple demonic personalities, and the riffs of Gaz do more than lilt along helplessly, is a fun number which would have felt right at home on one of this band's more exciting efforts. The wind instruments that herald "Reaching Happiness, Touching Pain" lead forth into one of the record's more effective, slow burns, corrupting 70s nostalgia by way of the band's moribund British minds. The album is clearly not without its moments.

But there lies the problem I still have here. Moments. The few that thrill me on this record do not tally upwards of 15-20, never mind the 54 that comprise its total manifestation. So much of this album is poisoned by dull, plodding drum rhythms and fragmentary Sabbath riffs that sound like no more than 20-30 seconds were placed into their planning. About as much time as it took Gaz to plug the damn amp in, is exactly how much time it takes even the most cursory six stringer to tear out a generic, neo-blues burn of this nature. There are precisely 4 riffs on this entire album that I found the will to acknowledge on any level beyond 'when will it end?'. As a result, the mind starts to search for anything to indulge it, and thus the crazed vocals, strings and other elements seem deceptively bolder. I'm no enemy of doom metal, in fact I'm rather fond of a few of its practicing physicians, but it's important to note that doom does NOT have to equal dull, nor does slow always equal heavy, and much of the guitar work and passive drumming here really feels like such a waste of space, even when the mood fits. Lost Paradise made me feel quite doomed. That album frightened me with its penitence and despair. This has had more of a My Dying Bride effect on me. That is to say, almost no effect at all.

Some purists would praise this album more highly than anything the band could later muster, but I seriously don't see how this equates to anything more than a minimal amount of effort. For the same reason I dislike a great number of hack funeral doom records, I found my sanity slowly reeling towards an escape as I was plumbing these depths for the last time. Forest of Equilibrium does not really suck. Dorrian sees to that with ample gloom...just enough of it to wash this record clean of total monotony. It just sucks on its own heedless ballast, and I'm sure the band must have felt a similar reaction, judging from the more amped up rocking nostalgia the band would spew forth on its subsequent releases. This album might celebrate a cult status due to the pair of decades its sat around, but I'm afraid my copy will be returning to the dust of neglect.