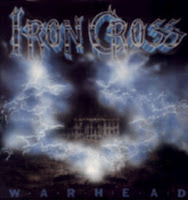 Long time underground lurkers would probably be familiar with the Pennsylvania thrash act Holocross, but before releasing either of those albums the guys dropped this 1985 bomb Warhead under the name of Iron Cross. There were a number of such crosses out there, which likely explains at least the shift in moniker. The styles of the two incarnations are not immensely distinct, but Iron Cross performed more of a mix of Judas Priest and Motley Crue, with a Char R.G. vocal performance that ranges from a dirty, ringing LA strip edge you might expect of a Vince Neil or Taime Down, to a higher, Rob Halford shriek.

Most of these tracks have a sound ripe for the arena, with drop out sections of bass pummeling along. After getting riled up at an Iron Cross gig, you'd totally want to cruise the local urban hot spot cranking the cassette out your window of your Pontiac. However, the band does not seem content with just the shallow element here, so you have tracks like "Warhead" itself, in which the band goes nuclear (pun intended) in serious mode. Sort of a mix of dark thrash and traditional heavy metal with angry vocals that sound like a cautionary warning courtesy of Halford or Dirkschneider. I rather enjoyed this side to the band more so than the hard rock aesthetic of something like "Come and Get It", and to be fair, the lyrics on several of the songs are more serious than you'd expect.

Regardless, most of the material here is fun, whether you view the band as some darker, pissed alternative to Ratt and Quiet Riot or the fertile spawning grounds for Holocross' more vicious sound. I think they compare rather well to a band like Krank or Bitch, with a little less of a joking attitude. Tracks like "F.K.Z.", "Cold Steel" and "Chain Gang" make for a savage, middle America Judas Priest with their added steel town ballast, and if you seek boogie metal primed for leather, spikes and a stripping pole, you could do worse than "Send for the Cross", the band's self-referential anthem with a nice building swagger to the chunky melodies.

Warhead is like a crude oil you'd put in your ride when desperate and out of 10W-40. It certainly sounds pretty lo-fi, but the guitars manage just enough crunch, and the vocals slice distinctly across the surface. The bass player might not do a whole lot, but at least he's there, and the drums hammer along at an adequate if subdued pace. If you've no interest in classic 80s metal or hard rock, and cannot see the appeal in the production jobs of that era, then it might be best that you stay very far away from this record. Get yourself a combover, a college degree, a pack of your favorite cigarettes and listen to the Artic Monkeys or whatever you're expected to. If you like to smile when you listen to your music, and don't mind a little derivation from better known metal acts with more successful careers, you might just find a little gasoline, piss and fun in this record.