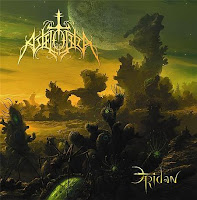 The barbed, yet tranquil, alien atmosphere of this album's cover art presents quite a mystery. Clearly from the logo one would guess the band's style at either death or black metal, and true enough it falls somewhere within the latter category. Yet I was actually quite taken aback by the graceful, hugely atmospheric sound this band creates, which slowly grows upon the listener with repeated listens. Astel Oscora are quite good at what they do, though they are playing in a genre that sadly does not get much attention these days, due to the polarizing effect of its top end contenders upon the metal populace.

By this I mean to say that Astel Oscora are a keyboard heavy black metal band whose focus is on the over-arching, picturesque landscape of the composition, in place of brutality or conjuring a pervading sense of evil within their rhythms. There is sorrow, truly, and there is beauty, but you will not find much in the realm of blasphemy, and if anything, this should separate them somewhat from the ministrations of their famous symphonic black metal peers like Dimmu Borgir, Old Man's Child or Cradle of Filth, beloved by some and hated (perhaps unfairly so) because of their easy target status as actual money makers. But I would urge the listener, even if he or she loathes the aforementioned acts, or symphonic black metal in general, to give Astel Oscora more than a passing glance. For this is a band of no obvious complexity, but a subtle sense for the dynamics of song that can both engage and haunt the beholden.

This is especially true of the more mesmerizing tracks like "Cherta Mirozdaniya (Feature of the Universe)", which rolls across a lush cosmic valley of slowly driving melodic chords and simpering synthesizers that use only simple patterns to ensnare. The vocals of Anubis are the fairly standard variety of well-produced black rasp, but they are used well, echoing where needed like a planetary body through the alien night. "Nimfa Kamney (Nymph of Stones)" is another quality track, with more intense drumming and arches of synthesizer that drift across the base of chords like stardust in a vacuum. I was also caught within the clutches of a "Sea of Malice", and the beautiful swelling of the flutes and chords in "Crimson World".

At times, I am reminded of the once great band Mental Home, or perhaps the older work of Nokturnal Mortum when they were far more heavy on the lush, gothic keyboards. But Astel Oscora is topically very different, their focus a mesh of folklore and philosophy, and the great skies across which only the unknown awaits us. There is nothing savage to this particular album, and in no way will it appeal to one whose ONLY ideal of black metal music is that laid upon him by Quorthon or Euronymous. This is more like a laid back cousin to Tidfall, Sirius or Alghazanth. The guitars are decent, but their priority does appear to be a complement to the lush, hazy atmospheres rather than the central instrument of the band. But it all works well in tandem, and this proves the band's ability for seeing the bigger picture. It's not entirely original, but I certainly enjoyed myself when listening, and Eridan is the type of effort which seems to increase in value with each successive exposure. A promising band, in both sadness and majesty.

Highlights: Feature of the Universe, Nymph of Stones, Sea of Malice, Crimson World