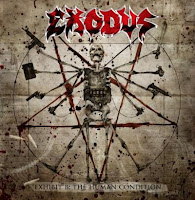 Now that they've finished raping their own past with the ill-received Let There Be Blood re-recordings, Exodus have put a lot of work into this 9th studio effort, the sequel to 2007's mediocre offering The Atrocity Exhibition...Exhibit A. There are well over 70 minutes of music here, which makes it the longest studio album by far, but the question is, does it offer enough incentive to carry its bloated weight? Of course it doesn't. If we were to carve off about 40-50 minutes of this experience, we might end up with something bordering on an average effort, at least at the level of a Tempo of the Damned or Impact is Imminent. Nothing ventured, nothing gained. However, the majority of Exhibit B consists of fluff that just don't pack a hard enough to remain imprinted in the conscience of the listener.

I've gone on at length in the past about how I'm not a huge fan of Rob Dukes' vocals, but I will hand it to the man: in some of the songs, he does his best here to really 'fit' the Exodus mold, with a snarling performance that comes closer to the Baloff and Zetro years than either the meek Shovel Headed Kill Machine or the direct predecessor to this album. In others, he sounds like a gelded version of Phil Anselmo. He doesn't have the level of wild abandon that made his two predecessors so valuable, but he also doesn't stink this record up. In fact, nothing really 'stinks it up'. It smells all rosy. It's long, dull, and lacking much in the way of character and compelling riffs, aside from the bare fact of its existence. Sure, what transpires is indeed thrash metal, and you can bang your head to with nothing better to do. But the days of sweating with anticipation until you can next spin "A Lesson in Violence" or "Brain Dead" are long behind us now. Exhibit B is a product that meets the bare minimum of expectations, but strives at nothing more, except its own, nearly 80 minutes of penis enlargement.

So where are the good riffs? They tend to occur in the beginning of most songs on this album. And that's that! "Class Dismissed (A Hate Primer)", "March of the Sycophants" and "The Sun is My Destroyer" all feature promising initial guitar onslaughts that become stretched thin and pummeled into oblivion when there is nothing surprising or exciting around any corner ahead of them. Technically the band are on fire, with a solid battering from drummer Tom Hunting and the ever presence, crunch tone of Gary Holt and his latest six-string co-conspirator Lee Altus (ex-Heathen, Angel Witch). "Downfall" is perhaps a little too melodic and glorious for Exodus, and in fact it sounds like a melodeath band, until the thrashing of the bridge ensues, much like any other Exodus song in your memory since the first two records. Tracks like "Hammer and Life" and "Nanking" really just suffer from their excess length. You get about 2-3 minutes of what I'd deem quality, and then a lot of filler that would be better used to rip out a classic in a live set. There are a lot of weak, but not entirely tasteless Panterisms (i.e. very boring, familiar tough guy rock grooves) ridden through the album, but this is not a huge surprise, as they've also appeared on the past few, and the band at least mixes them into the thrashing carapace of the record.

There are a LOT of songs here. After listening through the album five or six times, I felt no magnetism towards any of them. There are several riffs that, if placed in better compositions, might bring back the level of limited excitement once felt about Fabulous Disaster or Impact is Imminent. But as they stand, I will probably never go back to listen to them, unless I stumble across them at a live gig. And that's all to be said for Exhibition B: The Human Condition. It's a swollen mediocrity, and represents the further kicking of the long dead horse that once won all the county races. In order to prevent midlife crisis after hearing this, please spin Bonded by Blood at maximum volumes, then consume a glass of cold water and your depression pill of choice.

Verdict: Indifference [5/10] (when it's dead and gone we'll never miss a thing)