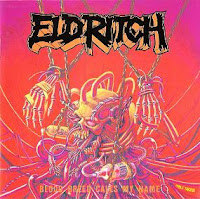 Japan was never a massive thrash metal scene, but what they did produce was generally on the side of quality. Bands like Outrage, Jurassic Jade, Aion, S.O.B., Sacrifice, Gargoyle and Doom were more or less the bulk of the roster, but they were later joined by a few more, short lived acts. Eldritch was one such entity, and their sole full-length Blood Breed Calls My Name showed a wealth of promise, combining a tasteful melodic speed with the charismatic crunch of both US and European styled thrash. One could think of the band as an Anthem or Loudness taken to the edge, as they maintain the soaring, shrill chorus vocals that dominated the more traditional strains of metal.

Blood Breed Calls My Name has a high level of polish, a professionally rendered mix that would equal or exceed many of the band's peers. The guitars are crisp enough to deliver their complex rhythms, whether a muted frenzy or a glorious rush of speed/power chords, and the rhythm section is far from complacent, with a loud bass presence and a drum performance worthy of almost any speed or power metal record from Europe of the time. The vocals of Yuichi Sato are probably the one spot where some listeners might stumble, as they cycle through a wide range of emotional, syllabic bursting that best corresponds them with their Japanese peers.

I've found that the faster and more aggressive this band operates, the better the songwriting. For example, the songs that sandwich this album make for some of its best material. "Shadow Fire" begins with a brooding, brief intro before the eruption of an incredible riff one might expect from either Artillery or a harder edged Priest-like power metal act. The speed of the track is tempered by an endless array of melodic infusions that one might expect from the more recent efforts by Anthem, complete with adequate solo shredding proficiency. Closer "Dog Eats Dog" is another rager, with some angry speed/thrash lines, gang shouts and a very Megadeth pacing.

Tucked between, much of the album's remainder is tightly written, but you've gotta dig around for some of the better riffs. There are straight laced power rockers like "Pig Blood Blues", "Massacre Song" and the lengthy, aggressive "Valis", all oozing with style and attitude, but very few money shot riffs. The title track is another 9+ minute track, and has another clear influence from Megadeth, but it's one of the better interior set pieces here. The classical instrumental "Lost and One" is rather dainty, and "Moon Hawk Project" is a fine, melodic number with some weight, taken from the band's first demo (along with "Massacre Song").

Blood Breed Calls My Name is an impressive outing, and leaves me wondering how successful this band might have been had they decided to stick it out. The production standard is high here, and the band's style would have likely been a huge hit had this album dropped a few years prior. By 1993, of course, thrash and power metal were fringe genres, far clear of the day's trends of grunge, alternative radio, and the growth of hardcore and death metal, so there was very little chance of Eldritch appealing outside of a select few loyalists. Not every song on this album screams of high replay value, but several of them kick serious ass, and the album plays quite smoothly as a whole. If you've ever craved a midpoint between Loudness and Megadeth, this is probably one of the few places to find it.