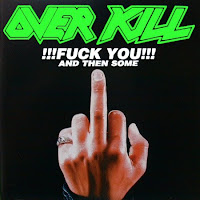 Considering the band's 30 year, massive and uncompromising career thus far, Overkill have taken very few liberties when it comes to their release schedule. Very few indulgences. A ratio of 16 studio albums to a pair of lives and another pair of EPs is not at all bad, and we can probably thank the band for never attempting to rip us off or let us down too hard. That's not to say all of their releases possess the same level of quality, in fact it fluctuates quite a lot, with the band never seeming to step fully back up to the plate where they hit their first few home runs. But as far as touring and maintaining their presence, I can't think of another East Coast thrash band nearly as consistent (that includes Anthrax).

Fuck You and Then Some is on paper a neat little valentine for fans who desire a few of the band's less common EPs in one pressing, and it is for this reason I picked it up. It incorporates the original !!!Fuck You!!! EP from 1987, the 1984 Overkill EP (originally a demo), and some additional live footage not available on its namesake predecessor. Having but a cassette of the original, and not even owning the s/t EP in any format, this made for a great aesthetic addition to the rack, though chronologically it arrived during the bands REAL years of decay, when they they were putting out lackluster efforts like The Killing Kind which brought in outside influences for a less than desirable result.

If it's your first exposure to the legend, then I would highly suggest you skip this and check out their first two albums Feel the Fire and the immaculate Taking Over, which have yet to be surpassed decades later. "!!!Fuck You!!!" is a novelty track, really, an obscure cover of The Subhumans, taking an immortal gesture and expression, and then pasting it on the front of an album when many still wouldn't dare. It was the perfect tune for some meathead angry at his boss, his girlfriend, his family, or especially in the 80s, the PMRC or other activists who were essentially trying to shut down the controversial end of the musical spectrum. Really, it's applicable almost anywhere, because that's the safety and novelty of it. Thrust a middle finger and exclaim "FUCK YOU". We've all done it. Sometimes, it made us content. Sometimes, it was deserved. Other times, we were just being pieces of shit, flinging our wrath and poo where it may not have been needed. Musically, it fits right in with the Feel the Fire era material, due to Bobby Blitz and his endless, concentrated testosterone (and I'm not poking fun, I truly envy this guy's ability), but it IS a punk song, so the riffs can't really be expected to impress on the same level as the band's original work.

The live tracks from the original EP are all present here, recorded in 1997 during a heatwave in Cleveland, Ohio. Taking Over was news then, so the material includes some timeless numbers like "Use Your Head" and "Electro-Violence", the latter of which is a personal favorite. In addition, they perform "Rotten to the Core", "Hammerhead", and "Fuck You" here, and between the tracks on the CD, Blitz works the crowd a little. It's the same drill Overkill have always insisted upon, an honest interaction with their fans and very little heady, arrogant bullshit. As to the sound, well, other than the fact the guitars often get a little overpowered by D.D. Verni's bass, it's not that bad. The vocals, in particular are quite good. Since this is a new edition of the EP, the guys have tacked on two more lives from a 1990 performance. One is a cover of Black Sabbath's "Hole in the Sky", which makes sense, since they were a huge influence on this band, as we have discovered from some of their less impressive, doom heavy offerings in the 90s. Blitz gives it his all, but I can't say I really love the track here. The other new live is "E.vil N.ever D.ies" from the band's most recent album at this time, The Years of Decay, and it's not bad.

Last but certainly not least, we have the original Overkill EP in all its glory. This includes "Rotten to the Core", "Fatal If Swallowed", "The Answer" and "Overkill". Three of these tracks appear on the band's first two full lengths, and "The Answer" is a slow, doom song with a huge Black Sabbath influence that gradually picks up the pace, though I've always found it lacks the serious riff skills of the other material here. At any rate, this is probably the coolest portion of !!!Fuck You!!! and Then Some to have handy when you're on an early 80s thrash kick, but if you've already got their first few albums, there's nothing really superior about any of the EP versions that you'd need to go out of your way for aside from some authenticity check.

So, is this package worth the scratch? If you're an Overkill addict, and have no access to the original material without succumbing to collector gouging, then have at it. If not, there's not much reason to bother with it, and you should instead buy a studio album. This is far from a failed fan tribute, but "!!!Fuck You!!!" was never that great to begin with, and even less poignant now, though nostalgia aside, I'm sure the devoted will froth and frenzy when it's performed in a set today. Just over 2 minutes of rebellion. The band also has full live records, which sound a little better than the offerings here, so that's not really a major selling point either. Really it's just a matter of having that s/t EP on a CD which makes or breaks this...