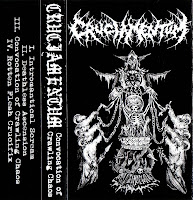 Lately we've heard all manner of wretched, old school death metal resurfacing across the face of today's trend-heavy society, but I cannot say that this is an unwelcome shift in progress. Maybe its the fact that a whole new generation of metal fans are beginning to 'get it', or maybe it's just a cyclic byproduct of our cold and uncaring universe, but bands from all over like Decrepitaph, Innumerable Forms, Denial, Obliteration and Vasaeleth are starting to forge the way for the hideous rebirth of late 80s/early 90s sonic atrocity, often coupled with the benefit of today's denser production possibilities.

Cruciamentum is actually one of the best bands I've heard in this movement, a British act with members from another, similar styled (and better known) group called Grave Miasma. Tempering the morbid hostility of the eldest Incantation albums with the occasional war stomp of a Bolt Thrower or the sub-thrash outbreak of Consuming Impulse era Pestilence, their Convocation of Crawling Chaos demo is a true pleasure to experience, and it will only cost you 18 minutes of your life. Well, it's possible the cost might be higher, as the sound these men produce is so hopeless and deadening that existence beyond its playtime might be called to question. Vocalist D.L. is a mixed breed of Martin van Drunen, Karl Willets and Craig Pillard, and the ichor of his intonations blends like another instrument to the band's highly grim and subterranean atmospheres. The riffs here are extremely base and cavernous, but the band have a strong sense for songwriting elements, like breaking for atmosphere or rolling into a chug riff with HUGE bass at exactly the right moment, so their crude efforts do not evoke any semblance of ennui.

The "Intromantical Scream" is but a choir being near muted below the rush of dark ambient turmoil, before the drum fill heralds the Bolt Thrower-like crushing of "Deathless Ascension", bass so thick it is rattling off like machine-gun fire from the cockpit of a tank, all the while the steady verse riffs giving you the impression of sinking through a tarpit to an underworld of phantoms being butchered by oblivion. At around 1:00 the track takes a brief, thrashing spin which reminds of Pestilence, and later slows to a floe of sparse, death/doom chords while D.L.'s vocals resonate off the top. "Convocation of Crawling Chaos" picks the pace back up to chugging, hellish warfare, with a riff not unlike something you might find on the first two Obituary albums. The final track "Rotten Flesh Crucifix" is re-inserted and extended from the band's earlier, single track demo of the same, with a style much like the others but a little more melody by way of some primal, obscure 90s Swedish band, and a great synthesizer swell near the climax.

In a way, Cruciamentum are old hat, but the best kind of old hat, the one that everyone stares at as you head out for your morning coffee. Totally repressive, evil atmosphere that evinces no stray light, no hope and no future. If you were swallowed by an Elder God, and slowly waiting to be digested throughout eternity, tendrils writhing and stinging your flesh with bowel acids, this is the music you'd probably hear somewhere deep within your consciousness. No rewards will be given for innovation, although like many of these new creatures, the production is simply massive in a way that few of the older recordings could muster. What more can I add? Cthulhu F'tangh! IÄ! IÄ! IÄ Cthulhu!

Need more of this.