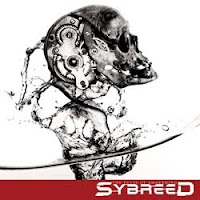 On paper, Sybreed seems like a rather uphill struggle. At least in today's narrow minded metal climate zone, where the unwashed masses are quite content to cage themselves into limited scopes of taste where simple and acceptable choices from the 'master list of cool bands' are the means of survival. Certainly, electronic/groove metal bands have seen some success through the years, especially Fear Factory, but this is a style that most would rather spit upon and cast out than support and evolve. Enter the third album of Swiss Sybreed, who perform a far more complex range of chugging grooves, harsh vocals, polyrhythmic math metal and European EBM/new wave electro elements that provide a more accessible grasp to those who can't stomach the sheer caustic elasticity of a band like Meshuggah. This unit reminds me more of a Danish act like Mnemic or Raunchy, though with the added complications of the excess electronic backbone. But they've got the same penchant for writing modern grooves that sink in, emotional clean pop vocals, and so forth.

The Pulse of Awakening is their 3rd album since forming in 2003, and to be fair, it's a slightly more challenging effort than you'd expect from most of the bands crossing these styles over. For one, they've got a real drummer, Kevin Choiral, as equally capable as many death or black metal drummers, and this provides a more organic (though highly polished) connection to the listener than the average industrial metal act. I'm not a huge fan of the guitars, as I feel they rarely stand out of their own, used primarily as a bludgeoning, percussive force to anchor down the glistening synthesizers, but there are a few riffs that stand out, like the bouncing groove below the verse of "Nomenklature" or the broken, eerie manipulations of "Electronegative". They serve their purpose in general, but be warned that if you loathe excessive chugging over the pulse of a synth, you're probably going to hate this album and this band.

The album is also a beast, at over an hour long, with 12 tracks, and its quite a lot to take in one sitting. You begin to feel like many of them run on together and become less distinct of their own merits. Of course, if you're looking for a non-stop, cyber-metal paradise to engage you for 63 minutes straight, Sybreed has your number. I prefer to actually listen to a few tracks, in spurts, so I can take in everything that's going on. Because if The Pulse of Awakening is anything, it's busy. Some of the tracks I took to included "In the Cold Light", which is basically an EBM track like you'd hear from Apoptygma Berserk, Covenant or ...And One, only with the heavier guitars added near the close. "Doomsday Party" is like Fear Factory for the dance floor, and your mileage will determine whether that sounds like a nightmare or an invitation to bring the spiked punch, but it's catchy enough that I felt the urge to listen repeatedly. "Love Like Blood" gave the impression of some hyper-metalized version of Duran Duran's "All She Wants", and for the more aggressive fare I enjoyed "Killjoy" and "Meridian A.D.", both of which have some labryinthine grooves and great chorus vocals. "From Zero to Nothing" is quite ambitious, over 19 minutes long from its actual core song to the resonant, ambient drifting that drags on and on.

As a delicate, deadly alternative to Fear Factory or other bands that have sampled these waters, Sybreed excels. In fact they are quite likely the best band out their doing this, at least until you delve into a more pure, industrial/metal crossover terrain. If your mind is open to the band's mix of treacherous chugging, and Ben's almost MPD fusion of snarls, hoarse angst-ridden poetry and clean vocals that give To/Die/For a run for their money, give this record a try. The biggest complaint I might have is that there is simply so much to absorb that it may work against the band, but if its value you seek, then it is value you will find here.