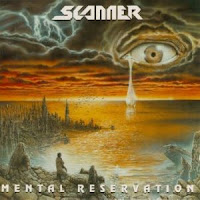 Six years after the kooky charms of Terminal Earth, and well into a decade of counter-cultures, cultures and re-countered cultures that could not care less, Axel Julius would finally accrue himself a new studio lineup for Scanner, and thus release the band's third full length effort through Massacre records, one of the few labels eager to snap up bands performing power and progressive metal during this period, and to a fault (they released some fairly inadequate material, like this album). On the surface, Mental Reservation is actually an only natural progression from the band's prior output. The Andreas Marschall cover art is intriguing, and the style of the band has not much changed. They're still a melodic speed metal, for better or worse, and Julius is still capable of quite a few chops. In fact, he may have technically improved as a player for this album.

As with any Scanner album, one can expect some degree of change in the lineup. But in this case, it's an ENORMOUS difference. Axel is the only remaining member from the first two records, and here enlisted bassist John A.B.C. Smith (At Vance, Gallows Pole), skin beater D.D. Bucco and the third vocalist in three albums, Harridon Lee, who you may also know as Leszek Szpigiel, who has worked with Mekong Delta, Wolf Spider, and Crows. Once again, Julius has made a sound choice. Lee's voice is silken and siren-like, and very much fits into the band's modus operandi. But there unfortunately some measure of charisma lacking here. Whereas Coe and Knoblich had this uncontrolled charm, like lasers dancing across the void, Lee feels more restrained, or rather more careful. Nonetheless, he is still wholly capable of a melodic pairing with the guitar melodies, of which there are a great many.

And that's the real quandary I have with this album. It fires on most of, if not all the cylinders of a Hypertrace or Terminal Earth, but fails to compel me beyond a skim of its surface. "Break the Seal" stirs up a thrash-infused storm of average riffing, before Lee carries us away around 1:30, like a soaring kite over a fairly enthusiastic melodic speed lick. It's difficult to ignore the guitars, because Julius is giving one of the more proficient performances of his career, yet so few of the notes stick outside the solo and perhaps 1-2 of the riffs in the verse and chorus. "Upright Liar" has a more vicious attack, and I enjoyed everything up to the chorus, which is dull, obvious and forgettable, transforming partway through into a more soothing, anthem-tinged power chorus, and equally underwhelming. Again, a lot of intense guitars that cycle through riffs that don't quite carry the burden, and a little frustrating. The slower paced mood of "After the Storm" comes as rather refreshing, and I actually enjoyed the chorus quite a lot, reminding me a great deal of the American band Riot in their more power-framed years.

The rest of the record evokes very mixed reactions. "Your Infallible Smile" is a power ballad, but despite its wealth of atmosphere it never quite impresses, the chorus feeling like some 2nd rate Slaughter song (not the thrash band, eunuchs). Graceful, melodic and just a little empty. Tracks like "Conception of a Cure", "Out of Nowhere" are pretty complex and aggressive by comparison to Scanner's earlier work, but neither manages to squeeze out more than a single decent riff. I feel like the weight of the record rests on the shoulders of the more straight rocking, mid-paced tracks like "Rubberman" and "Wrong Lane Society", which again assert a hint of thrash into their modern crunch. Neither is a truly memorable affair, yet there is a dependable power to their characteristics which does convince the head to bang...a little. The grand finale, "20th Century Crusade" is probably the best of the faster material on the album, with some soaring melodic hooks, a great intro, and a cruel bite to the verse vocals, a decent song that feels like Scanner of the late 80s.

Technically, there are not many faults here. The lyrics here are arguably better than the past, though not nearly as amusing. The guitars feel a little thin in the reverb driven, atmospheric mix, but they compensate through their overall business and cutting delivery. The vocals are versatile and satisfactory, like Szpigiel's performance on any other album, and I am left to wonder how he'd sound on an album of really well written tracks. That's not to say Mental Reservation is a poor effort in the song department, because surely, nothing here deserves the label of 'bad', and even at this height of mediocrity, they still have more to offer than many other bands performing speed or power metal. And at the very least, a band thought long dead had returned from its hibernation, to make a stab for success in a time when so many had forsaken the format.