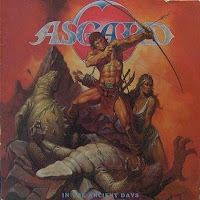 Noise Records was quite possibly the best European record label in the 80s, helping lay the foundations for bands as incredibly varied and talented as Voivod, Kreator, Celtic Frost, Helloween, Running Wild, Rage and Coroner. But their batting average was not exactly perfect, especially when one considers some of the weak releases of the 90s, closer to the label's implosion. In the 80s, there were very few releases through this label that I did not adore, but the sole full-length of Holland's Asgard was one of them. Formed under the name Angel Dust, they switched their name to Asgard for the Noise debut, most likely due to some conflict with the German band of the same name who played in a similar (though vastly superior) style.

The cover of In the Ancient Days is certainly inviting, with its barbaric and monstrous imagery that rekindles the fire in my loins for the writings of Robert E. Howard, but the music itself is quite lackluster. It's run of the mill, speedier thrash, on the grittier side, but lacking almost any riff that I could distinguish from the horde of other bands excelling in this style. Basically, take the vile speed of Iron Angel and apply the vocals of a band like Hallows Eve (the earlier stuff, and add an accent). What you come up with is the Dutch Asgard. The band is not always playing at full speed though, and when they tone it down a little, they remind me more of the Danish band Witch Cross.

And I actually prefer this side to the band, on tracks like "Hounds of Hell" , and also "Witches Brew" where it picks up from the dull, clean intro and goofy sounding narrative bits. "Screaming Knights" also mixes up a faster and slower tempo, with plenty of riffs, and its one of the better songs on the album, though that is not saying much. As for the rest...all sadly forgettable. "Before the Morning" moves from fast and uninteresting to a wasted descending melody that stands out in the mix as it flashes above a very boring, slower thrash riff, to a half decent solo spike. "High Society" is quite horrible, and though "Possessed by Evil" makes an effort to introduce a warlike marching rhythm and a cool echo to the vocals, you won't remember the actual riffs once the song ends. There's a classic, Spanish guitar instrumental "Granadinas" which makes little sense on the album, and "Metal Tonight" is all atmosphere which once again suffers from a lack of inspiring guitar writing, despite the near wanking of the intro.

It kind of pained me when I first heard this album, because Noise had become synonymous with high quality to me, and as a 12-year old I had to be pretty careful where I spent that paper route money. This was not money well spent, and probably one of the worst releases for the label in the 80s. If you're looking for niche Dutch speed and thrash metal, I'd advise you to skip this and make a b-line for the more aggressive bands bordering on death metal, like Dead Head, or the debut from Pestilence. Everything Asgard tried to pull off here would be done better by German bands like Iron Angel, Vendetta (first album) and Deathrow (Riders of Doom and Raging Steel).