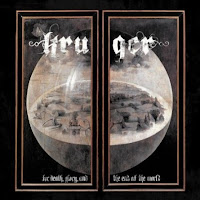 Another band with the ability to topple conventions and prove the relative dysfunction of the means by which we label extreme music today, Swiss Kruger have concocted a fourth album which not only trumps all previous outings, but actually creates a refreshing and unique space within the genres of sludge, groove metal and metalcore. That's not to say there is not some overlap here with other, existing artists, but the means by which these gentlemen transfer their blueprints into an actual product falls, for the most part, outside the realm of any safe and identifiable sound.

Bands that might represent the best comparisons for Kruger would be the infamous Mastodon and the largely defunct New York artcore magnates Snapcase, but this is largely in the vocals of Reno and the means by which they flood their tracks with these churning, post-punk grooves. However, the loud blasts of bass guitar and the thickness of the riffing patterns are this bands selling points, and they possess little of the jamming tendencies of Mastodon. So a European Snapcase, or a sped up and pissed off Neurosis of Fugazi would be the closest I can think of, with perhaps an inkling of similarity to another, newer act like Tombs (though not as dreamy).

For Death, Gory and the End of the World was recorded here in Massachusetts by Kurt Ballou (of Converge) at his God City, and I have to admit it is one of the best sounding albums he has produced through his considerable (and ever expanding) repertoire of studio work. The tones are wonderful, especially in the interaction between the bass and the more spatial, melodic guitars, and each instrument is perfectly mixed. If we were to shave it down to a single genre, then an argument could be made that Kruger have to their credit one of the best, brightest sounding albums in all of the sludge sect. You can hear everything, and combined, the three string bearers exude quite a force, both melodic and pummeling.

It seems like each song on the album has the ability to create this vast polar spectrum, from a driving post-hardcore rhythm to a more than tolerable segue of drifting, jangly jet stream melodies. Perfect examples of the balance include "Villains", a stunningly precise piece which opens with a graceful force beneath angst added vocals, inserts a slight rush of a more frenzied, hint at complexity, and then walls of melancholic contentment before an extended bridge where the percussion pulse bleeds to the forefront, guitars gleaming off the edges of the skin tapping. At the close, the aggression escalates through darker, bouncing riff patterns dredged in the tones of urban rust. For other examples of their crushing material, "Muscle" has a feel of flexed joints and stretched cartilage across a thundering bass line; "Dukes of Nothing" a more carnal, grooving sensation that disappears into a spacious beat; "Our Cemetery is Full of Strangers" a loaded gun of forceful melodic walls, behind which a backing vocalist can be heard echoing the sentiments. I also really enjoyed the weight of the "Anthem of Pretended Glory".

Kruger will most likely find their crowd within the fans of modern sludge and progressive hard or metalcore music, but their base creativity, and sensitivity to smart, powerful grooves makes me wonder if they'd also reach the fans of a band like France's Gojira. There is nothing cheap about their expression. It's the transfer of emotions across the ballast of exertion, and to keep up through this record's peaks and valleys requires a certain amount of resilience. They don't come up with money shot after money shot riff here, but all course are plotted to create an album in which the listener's attachment becomes a difficult thing to dissolve. With a massive production and a boundless, dreary bludgeoning determination, look for more heads than eyes to roll here.