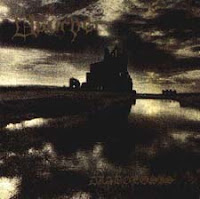 There are a number of veteran bands who have carried forth the torch of Hellhammer/Celtic Frost's brand of unique and formative black, thrash and doom metal, with all its massive, sludgy bombast, and Tom G. Warrior styled vocal constipation. Brazil's Apocalyptic Raids are essentially a carbon copy of the Swiss legend; the German tyrants of Warhammer also come strikingly close; and in America, we've got our own tribute, Usurper, who are probably named for the Celtic Frost song appearing on To Mega Therion. Of these bands, I feel like Usurper has always been the most interesting. The influence is immense, and unmistakable, especially on the band's 1995 debut Diabolosis, but even in these waking years I feel like this was a beast who would attempt to channel the masters into new transgressions of sonic barbarity.

This is a pretty serious sounding record, with a darker theme and tone than some of its successors. The band had not yet entirely embraced their love of kitsch horror and crypto folklore, thus there is a bleaker, harrowing aesthetic to be had here. The guitars of Rick Scythe are wholly primal and crunchy, but he's not afraid to throw in some bizarre, slow grooves to separate some of the denser, metallic riffing. The production is cavernous, and remains strangely vivid and relevant even in comparison to most modern recordings. The band also make use of ritual and horror samples to great effect, and gong like crashing that once again reminds one of Celtic Frost (the best example of this is the closing "Dusk"). It's a monstrous debut, and one that landed them some international attention due to its release on respected underground European label Head Not Found.

Of course, an album like this runs to the risk of being labeled a soulless 'rip off', and at its core, it is hardly some font of originality. But to sell it short would be to miss out on something pretty special, especially hailing from a Midwest scene in the 90s that was almost gouged to the gullet on forgettable, brutal death metal in the vein of Cannibal Corpse and Suffocation. In addition to General Diabolical Slaughter's more grueling take on Warrior, the band also incorporate some black snarls, as in the storming opener "Hypnotic Void". They can take a bleak, dark ambient tangent with "The Infernal Storm", which features some howling samples alongside Jon Necromancer's plump, bone chewing bass tones. But most of the time, they will simply rock your face off with a doomed certainly, using riffs that would take no competent guitarist more than a few minutes to compose, yet slay regardless. I'm speaking of "The Ruins of Gomorrah" with its crushing, sparse muted momentum beyond the 2:00 mark. Or of the ghastly, morbid "Full Moon Harvest", which rolls along with some condensed, bluesy ballast, like a black metal sludge alternative to Danzig. "Nulla Sallus Extra Eccelcium" and "Diabolosis" are others that continue to crush 15 years into their existence.

Usurper was a working band, who gave us well over a decade of disgust without once selling out, once complaining that they weren't somehow more successful, and playing honest and hard when and where they could, with a good number of tours. They are a metal man's metal, in stark opposition to the technical extravagance that many younger artists have forced to 'evolve' their genres. Diabolosis is a great debut that channels the weight of Hellhammer, the grime and blasphemy of Venom, and the punkish violence that spawned Mayhem into a memorable black abyss, and it remains one of the band's most lasting punishments.