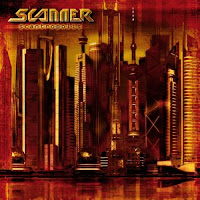 Ball of the Damned had brought the gleam of hope back into the eyes of the Scanner fan, but all too soon, and before you could count the dividends, Axel Julius had once again sent the project back into limbo. Of course, it wasn't the first time Scanner would fall into a 5 year slumber in their career, and seeing that the band had returned in the 90s for both Mental Reservation and Ball of the Damned, one couldn't be so sure if they'd heard the last of them. And they hadn't. For a half-decade after the fires had died, the furnace was stoked yet again, the wells of inspiration teeming with new life, and with yet another, almost completely new lineup, but the same label, Axel Julius would return once more with his circus of melodic, science fiction inspired metal.

Yet again, a massive change in the band's roster would also signify a notable shift in the musical direction, this time towards a broader, powerful rock aesthetic steeped in melody, atmosphere and a noticeably larger sounding production ethic that likely owes itself to the times. Of the Ball of the Damned lineup, only Julius and bassist Marc Simon remained, recruiting new guitarist Florian Haack, drummer Jan Zimmer, and keyboardist Johanes Brunn. But by fire the biggest alteration Axel made here is the hiring of female vocalist Lisa Croft. Yes, the fourth vocalist in five Scanner albums. Considering the relative quality of the band's previous frontmen, it comes as no surprise that Croft is actually quite good here. She's got a strong, if nasally voice that seems to flesh out the music here wonderfully, and quite different than the hordes of fairy, gothic and power metal Nightwish impersonators exploding at the time. So with the new pawns in their place on the chessboard, how does the music hold up?

Well, it remains Scanner, despite its bigger sound and heightened emphasis on the immaculate art of the chorus. You'll still hear tasteful speed metal licks cutting through the scintillating work of the synth player, and Lisa Croft can carry a tune with ease. Unfortunately, the greatest strength of this album is also its one weakness. Some of the chorus parts are so well written that the rest of the music tends to suffer, since it all simply serves to swell up towards those few seconds of aural bliss. This is especially true of the first two tracks. "Till the Ferryman Dies" is all lush, almost orchestral rock which leads through an AOR verse with some electronics and power chords, building to familiar Scanner-speed metal briefly before the beautiful, unforgettable chorus, where Croft leaves orbit for a second to touch the sun. But aside from the thrumming electronics that anchor the verse, the rest of the song borders on mediocrity. Not even the spy like bridge can distract your ears from wanting to hear that chorus again. "Hallowed Be Thy Name", while faster and more closely resonant of the band's past material, functions much the same, with a massive chorus anthem that was probably deserving of pop radio play (love the subtle touch of the guitars below her vocals).

In fact, these first two songs come to such a satisfactory climax, that the rest seem pale by comparison. "Flight of the Eagle" takes on a flourish of prog metal, with a mildly memorable chorus, but is otherwise indistinct. "Turn of the Tide" uses some electronic pulses and sampled horns to provide a very futurist, almost avant-garde feel, interesting to listen to, but not exactly delivering the tear-welling chorus. "Always Alien" is an extremely atmospheric rock piece, with the arrival of metal limited to the solo rhythms. "Engel Brecht's" once again uses the synthesized brass sounds and German lyrics, sounding like some bizarre female Rammstein from off a moon of Jupiter. "Sister Mary" and "Rest in Pain" attempt to capture back the glory of a "Ferryman", and they draw fairly close, with good if not superb choruses. The album also includes a live rendition of "Till the Ferryman Dies", which sounds pretty bright. So, yes, she can also do this live.

As conflicted as I feel about Scanner's shift from an unbridled melodic speed metal force to a modern approximation of female fronted, poppy prog. rock, there is something to this album I enjoy, even now. Perhaps the spacious elements, or the angelic simplicity of Lisa Croft's performance, or the stilted attempts to incorporate all manner of electronica into the rhythms. Its very safe, and its very sleek, but like that latest pop diva playing on the radio, you just find it so difficult to forget. And that, my friends, is legitimate music, whether you wish to admit it to yourself and acknowledge the little square inside you, or live in denial. The riffs could have been better, and a few of the songs suffer a minor identity crisis, but as a simple means of escalating each track to its inevitable, breathtaking conclusion, most of the components of Scantropolis are at least adequate to enjoy with an open mind.

Highlights: Till the Ferryman Dies, Hallowed Be Thy Name, Sister Mary, Rest in Pain