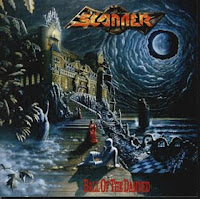 While my own reception to Mental Reservation was lukewarm at best, there is no denying that it rekindled a small amount of interest in the band, not to mention the fire within Axel Julius. By the later 90s, the German wave of power metal was truly starting to take flight once again, on the strength of bands like Blind Guardian, Rage, Running Wild, and Grave Digger, who had continued to churn out efforts of a general quality if not utter brilliance; and the promise of exciting newcomers like Iron Savior or Primal Fear. So the time was right for Scanner to once more enter the studio and produce whatever momentum they had attained with the previous record, coupled with the high regard many held for their earlier material.

This time, Julius managed to maintain a few key personnel. Leszek Szpigiel remained in the fold, making him the sole Scanner singer for two consecutive albums. Drummer D.D. Bucco also stuck around, but Julius recruited a new bassist (Marc Simon), an additional guitar player (Stefan Nicolai), and a full-time keyboard player (Stephan Braun). Keeping some of these ingredients intact turns out to be a positive thing for Julius, because Ball of the Damned is a better album than Mental Reservation. Clearly, Axel had no intention of returning to the band's heyday, instead interested in a slight progression, and it shows. The guitars are just as intricate as the previous record, but the vocals are a far cry superior, soothing and smooth, yet sharp enough when necessary to cut straight into the ether, the starlit night evoked by most of Scanner's compositions. More importantly, the songs have a more lasting impact to them, and the album is generally a pleasure to listen straight through, without picking out specifics.

It never hurts to start an album with a strong track, and "Puppet on a String" is exactly that, the best Scanner speed metal track post-Terminal Earth (and remaining so, to this day). Guitars that scorch with both the archetypal power of the genre, and a subtler level of intricacy, not to mention the iron grasp of melody. Szpigiel's performance is also top notch, bitter angelic vocals resounding across the vortex of clouds in the upper right corner of the album cover. "Frozen Under the Sun" likewise rocks pretty hard, with the intricate melodic speed just before Leszek launches into a beautiful chorus. "We Start it Tomorrow" works best when it hits the bloodied melodic grooves at its core, but its nonetheless a solid piece of this puzzle. "True-Stories-Teller" is another beautiful piece, stricken with a plague of majestic melodies and brief segues into clean, classical guitars, and "Tollshocked" is similar, though its dainty interludes are dispersed through a straightly played, memorable power metal anthem.

Aside from the staggering bass and classical elements that grace the slowly escalating "Ball of the Damned", there is not a lot of meat to the rest of this album. And even though that song is not what I'd consider one of the best here, its interesting enough that you'll not want to skip through it rashly. "Lord Barker's Theme" is simply an organ piece performed by guest Gerald Saloman, and "Judge on the Run" is a pretty standard mid-paced power metal rocker within the influence of Judas Priest or Accept, well-plotted but lacking any truly memorable riffs. The album ends with a choral march "Intermezzo" that leads into a cover of Queen's "Innuendo", which Scanner is quick to make 'their own' with a rendition that positions itself seamlessly into the fabric of their original work. It's well done, but until the solo, I wasn't all that impressed.

Ball of the Damned has its shit together, and though not at the level of other German releases of its day like Imaginations from the Other Side or the dumb fun of Grave Digger's Tunes of War, it should both sate the general power metal fan and assuage some of the disappointment die hard fans like myself might have felt when we realized there would be no further Hypertrace or Terminal Earth. The material is mature, refined and rather well produced, with a unique atmosphere of mystery that doesn't alienate the band's science fiction roots, but also feels less glaringly geeky or obvious. It was cool to see the band continue with a good chunk of the line-up in tact, but this will change once again in the years to come, after another long hiatus, with what I'd consider Scanner's most drastic change in style and tone.

Highlights: Puppet on a String, Frozen Under the Sun, True-Stories-Teller, Tollshocked