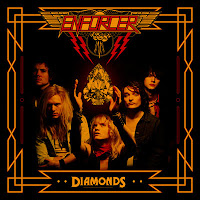 The styling of traditional speed and classic metal is all the 'latest' rage these days, with larger genre labels like Earache snapping up a number of artists to carry out the execution of the revival. Will it somehow succeed? I very much doubt it. But considering the enormous backlog of bands in this genre who were around in the 80s, releasing great material and never receiving much international attention, at the very least we can hope these younger bands spur on some sort of mass nostalgia. Several have tried thus far, and in many cases, like Earache's other 80s cult White Wizzard, the result is not all that impressive. Sweden's Enforcer, however, may just have the chops and attitude to really pull it off.

Yes, the band carries with them the image of an 80s act. Stylish stage clothing, 80s like album covers, and suitable logo for the time period they are emulating. But what's more important, I never once feel, when listening to their sophomore outing Diamonds, as if they're anything less than a genuine article. I don't imagine Enforcer sitting around their jam space, brainstorming a bandwagon they can hitchhike to achieve some sort of success. They don't come across as a group of teenage internet 'scholars', revisionist punks who got into metal music in through Rock Band on the XBOX and feel like they need to rationalize themselves with worthless lyrics about 'metal' or the history of metal. No, Enforcer feels like the real deal, as if they grew up with classic metal music like Angel Witch, Riot, Lizzy Borden and wish to share their love for these times by adding to the legacy rather than mocking it.

Their first album Into the Night was a success, but I feel as if Diamonds is one step better. This is a legitimate work of 80s speed metal, rooted in the British tradition, with a slight hint of reckless USPM and a production job which does not date it much beyond the period it emulates. The lyrical subjects range from samurai to smutty, steamy city life, and as irreverent and irrelevant as that might seem, I greatly prefer this to songs about 'thrash' and 'beer', 'moshing' or 'heavy metal _ _ _ _ _ _' which insult the intelligence (unless you're a Japanese Engrish band like Metalucifer which takes it all to such a level of absurdity that you cannot help to become glued to it). Enforcer are not unique, and they know they're not, but they're hardly Captain Obvious either, and for this I am thankful.

I am also thankful for both the nostalgia and I blazing, melodic bliss of tracks like "Katana", "Roll the Dice", "Live for the Night", "Take Me to Hell" and "Diamonds", all of which seethe with qualities I had thought long dead for over two decades. The rough, almost broken vinyl like feel of the mix, and the quivering, but savory throat of Olof "Enforcer" Wikstrand create a hurricane of excellence. But the band can also smooth out the ruffles with a mellow, psychedelic rock moment like you find at the close of title track "Diamonds". Another highlight of this record is the steady "Running with Menace", which feels like pre-80s Riot with even better vocals...but I'll come clean: there is not a single song on Diamonds that I did not enjoy, and if any album is to be considered a flagship for this return to the fundamental speed and boundless excess and energy of metal music, I do believe we're listening to it.

Do you miss the crisp promise of your 80s metal vinyl collection? Do you wonder why so many bands can no longer manifest such spikes & leather today, turning instead towards the safety net of down-tuned brutal extremity? Do you miss the age of the Trans Am? The coin op arcade? Women in makeup and big hair? Do you sing elegies to the days of your hesher adolescence? Enforcer has answered your call, with a good old burst of energetic fun that will not talk down or insult you, but instead celebrate alongside your finer memories, and help you hang onto them a little longer. Diamonds were a girl's best friend. Now they're a banger's best friend, and to the rest of the retro knuckleheads out there: you have your work cut out for you.

They have a guitarist from Tribulation and Repugnant. Can't go wrong.