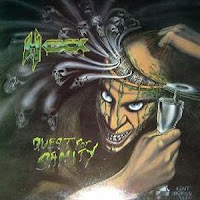 By the late 80s, the popularity of US metal had clearly shifted away from the early speed and power metal that had only just gotten its roots into the soil, and towards the now dominant genre of thrash metal. Bands like Metallica and Megadeth were headed towards the status of platinum artists, if not already there, and the hottest touring tickets in town, along with peers like Anthrax, Testament, Exodus, Slayer and Suicidal Tendencies. For many bands hanging at the fringe, it was time to put up or shut up if they were to ride this new wave of excitement. Some of the more traditional metal bands simply dissembled and reformed under new projects, but others took a swing towards the more violent sound.

Hexx was in the latter category. Having released two glorious albums of melodic, high powered heavy/speed metal (No Escape through Shrapnel and the excellent Under the Spell through both Shrapnel and Roadrunner), it was time to season a little extremity into the band's broth. After parting ways with vocalist Dan Bryant, Clint Bower (who would later go on to play in more extreme acts Abscess, The Ravenous, and Eatmyfuk) took over the vocals, using a harsh crossover style which fell somewhere in between Sadus and The Accüsed, with an occasional shriek thrown in for good measure. Musically, they morphed into a hyper violent, filthy fist of thrash and speed metal, letting off plenty of steam but keeping the ability to drop a melodic solo at a moment's whim. Sadly, this Hexx is neither as memorable or as fun to listen to as their earlier incarnation.

No, there are no "Hell Riders" on this album, and what you end up with is a slab of pure Bay Area speed/thrash that lacks the force and aggression of a Dark Angel or the immortal propensity for evil hooks that launched the titanic careers of Slayer and Metallica. The band sounds more in line with a Sadus or Holy Terror, only lacking the bass wanking of the former and the ability of the latter to pattern intensely memorable riffing into their songs. It speaks reams when the one thing that stands out in your song is the solo section, but alas, that is what Hexx has come to. Almost all the five songs here fail to sink into the memory, with the possible exception of the creepy closer "Sardonicus", telling a cool tale of terror with some low-shifted vocals and a decent slew of riffing, though barely rising above the average din of its surroundings. "Racial Slaughter" at least maintains a sickening, busy pace. Others are not successful. "Mirror of the Past" sounds like a half-assed butchery of Destruction's "Mad Butcher", and I'd be damned if I could ever remember a single lick of "Twice as Bright" or "Fields of Death", though the latter has a nice, frenzied lead section.

I can understand why a band like Hexx might feel the need to re-confirm its identity, but the Quest for Sanity lacks all of the allure that drew me into Under the Spell, a killer album loaded with hooks and arguably one of the best and most overlooked articles in all of US speed/power history. This thrash phase would certainly not have the legs to carry them past the competition, and I almost feel like it soils the earlier half of their career. This material is hardly terrible, and competently performed, but neither is it impressive by any shape or means.