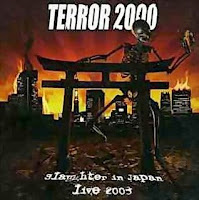 This Swedish collaboration must have been a hot commodity at some point, or why else would a label drop a live album after a mere two studio efforts? It's not like they're the Jonas Brothers. Like all lucky flashes in the pan, Terror 2000 struck a match in one of the world's most tasteful nations, Japan, and this record was recorded there in 2003 when they were touring with the German legends Destruction. From the sound of this, it might not have been the best idea to release it, because the band's live sound is not really on par with the studio counterparts, and in particular Speed seems like he's half choking on his own vocals, or too drunk to stand up straight. The bass also feels a little too loud, like a bomb, and the riffs are not as precise or fluid as one would expect.

Then again, these guys perform such intense riffs that one can hardly fault them for not living up to the land of constant re-takes and overdubs. For what it's worth, they come close enough not to sound sloppy. These guys had only two records out, so the material is divided up pretty evenly. Slaughterhouse Supremacy is represented with "Terror 2000", "Firebolt", "Son of a Gun, Daughter of a Slaughter", "Slaughterhouse Supremacy". Faster Disaster's contribution to the set includes "Burn Out in Blood", "Faster Disaster", "Back With Attack" and "Menace of Brutality". That's right, no "I'm Speed at Night", which is by far my favorite song by this band. Robbery! I guess the only 'treat' on the album is an unexpected cover of Elvis Presley's "(You're the) Devil in Disguise", but sadly this is pretty lame, with Speed in a stupor over the bluesy grooves and the attempts to jack it up to Terror 2000 pacing falling a little flat. The band introduction sounds a little awkward...I guess YOU HAD TO BE THERE.

I can think of no real impetus to purchase this live effort, unless you like to collect plastic things, so that you can pass some mounting burden on to your younglings when you die. The band don't really pull off a studio level of sound here, and even if that's not what you expect, you will still wind up somewhat disappointed. The cover song is flaccid and forgettable, and all we really take away from this is, and the live pics on their website, is that Terror 2000 are lucky bastards who got to play thrash metal in Japan and have a blast doing so. Envy aside, this is a dump.